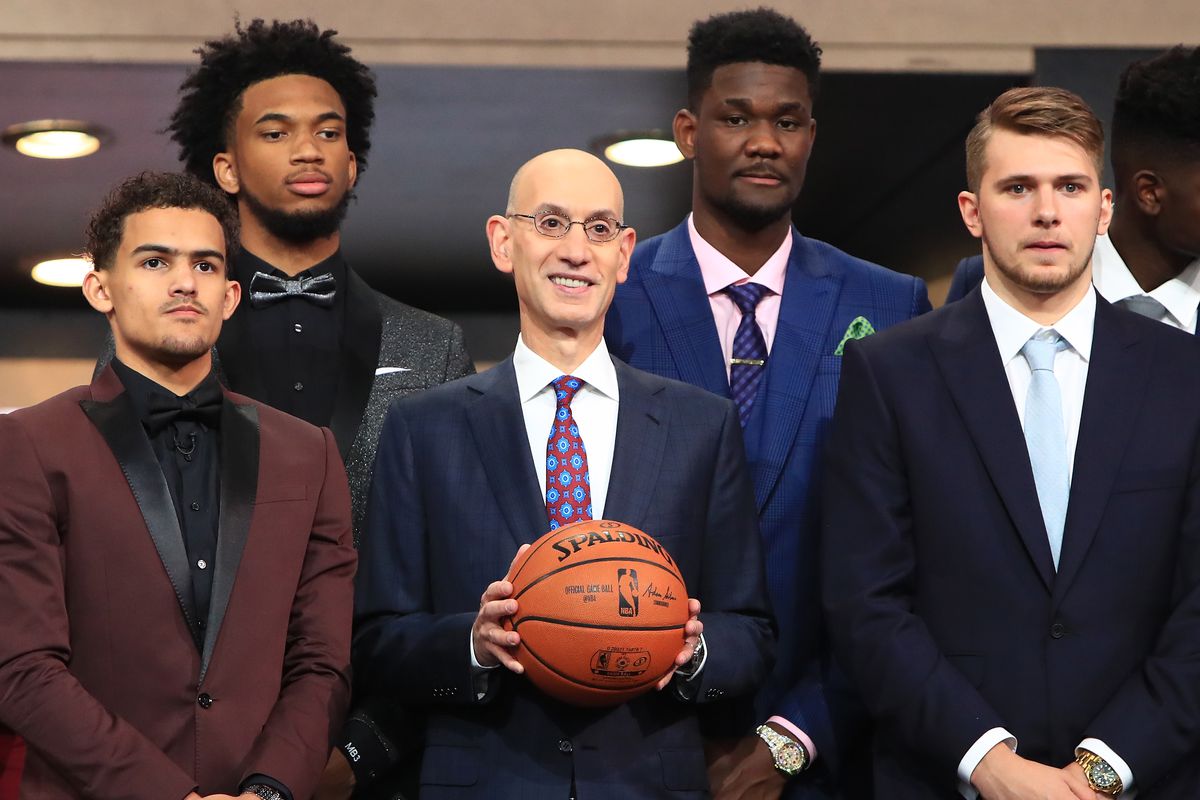 The 2018 NBA draft lottery was Tuesday night and boy did that shit suck. The anticlimactic build up was filled with awkward interviews, players not wanting to be there, reporters forgetting Michael Finley’s name and to cap it all off the Bulls failing….again. Majority of die hard Bulls fans are on the #firegarpax train and tonight was just further confirmation. For fucks sake, we cant even tank right. Winning too many games was a hot topic all year, specifically the egregious 7 game winning streak in December that ironically just landed us the 7th pick in the 2018 draft. Before I dive into my draft predictions I want to say that I am a huge Bobby Portis guy, I just wish his haymaker would’ve done a little more work on Niko to avoid that December debacle.

Does this look like a tanking team to you? No, no it does not. It’s literally the perfect blueprint on how to fuck up tanking. Equally as comical is the year the Bulls front office finally realizes we are stuck in NBA mediocrity, 6 other teams out-tank us and we land directly in the middle of the lottery. Anyway, lets take a look at how these first 14 picks might play out.

#1 – Phoenix Suns: Deandre Ayton – I’m not personally sold on him due to his weak as fuck tourney play (1 game) but I think this one is pretty obvious. There’s no question this guy is a physical freak, at 7″1′ with handles and a decent mid-range game, Ayton has the physical gifts to payoff as the #1 overall pick.

#2 Sacramento Kings: Luka Doncic – The biggest winners of the night jumping from the projected #7 pick all the way up to 2nd overall, the Kings will probably fuck it up. I’m no European ball expert but personally I’m not making this pick. Yes, the scouts say “he’s the most NBA ready player in the draft” but from the limited tape I’ve seen, he’s white and that historically has shown to be a risky proposition.

#3 Atlanta Hawks: Jaren Jackson – Total upside/potential pick here, Jackson didn’t really produce at Michigan State but he is a stellar athlete and has the all the tools to become a star in today’s NBA.

#4 Memphis Grizzles: Marvin Bagley III – Could be a steal at 4 as I think Bagley could turn out to be the best player in the draft. Bagley is an extremely skilled/crafty PF with the potential to develop a consistent jumper. Grizz fans could get used to having Marv fill the Z-Bo role for the foreseeable future.

#5 Dallas Mavericks: Mohammed Bamba – Dirk is old as dirt and the Mavs could use a freakish big man to work the pick n roll with Dennis Smith Jr.. Bamba projects to be an immediate contributor on the defensive end, but if he puts in the work, he can become a respectable offensive player as well.

#6 Orlando Magic: Trae Young – This might be more of a personal hope than a reality. I desperately want to eliminate any chance of this guy being a Bull. Look, I get this guy has extreme “Curry-like range” but let me be clear. This guy is NOT Steph Curry. We’re talking about the best shooter of all time. Just stop with that shit. For a team that makes moves as questionable as trading DIPO, this seems like the perfect landing spot. My advice to Magic fans: if you land this guy hopefully sports betting will be legal in Florida by the start of the season and you can clean up betting the over on his turnovers.

#7 Chicago Bulls: Michael Porter Jr. – Risky, yes. Porter missed basically the entire season due to a back injury, but let’s not forget this guy was widely considered to be the top prospect entering the season last year. Porter needs to pack on some muscle but this guy can score and thats exactly what the Bulls need. “Younger & more athletic” is what GaxPax said when they decided to sign Rondo and the corpse of D Wade. I think this actually what they meant.

#8 Cleveland Cavaliers: Collin Sexton – Let’s pretend LeBron is staying (he’s not). The Cavs desperately need a play making PG. The position has been a turnstile for them this season featuring IT2, D Rose (RIP), Jose Calderon and George Hill. Sexton is the type of speedy play-making guard that could help convince Lebron to stay in the land. Not really though.

#9 New York Knicks: Mikal Bridges – Bridges showed flashes at Nova and has drawn Paul George comps. While I’m not convinced he carries that kind of upside he seems like a safe pick inside the top 10.

#10 Philadelphia 76ers: Kevin Knox – Really thought this guy made some big strides in the tourney, continuously hit big shots and played physical. Knox is exactly what the Sixers need, a physically imposing stretch – 4. I’m a big Saric fan but I think Knox can bring a level of physicality needed to take on the Celtics for years to come.

#11 Charlotte Hornets: Wendell Carter Jr. – Carter & Howard could potentially be a lot to handle. Carter projects to compliment Howard quite nicely, he has a solid jumper (41.3%) and can actually make a fucking free throw. Averaging 2.1 blocks and 9.1 rebounds last year, he brings solid defense and rebounding ability to the table as well. This is a guy I would love the Bulls to snag at #7 so #11 might be a steal.

#12 Los Angeles Clippers: Robert Williams – Williams has a similar skill set to Deandre and with Deandre’s Clippers future in question beyond next year, Williams could fill that role seamlessly.

#13 Los Angeles Clippers: Miles Bridges – Bridges played like a piece of shit in the tourney vs the Syracuse zone but he has the physical tools to be a difference maker at the SG/SF position. He’s got the physical build to step in and play immediately but he seems to lack that MAMBA mentality.

#14 Denver Nuggets: Shai Gilgeous – Alexander – Going to be completely honest here. I know absolutely nothing about this guy. What I do know is the Nugs love drafting guards and this is a Kentucky PG not named Marcus Teague.