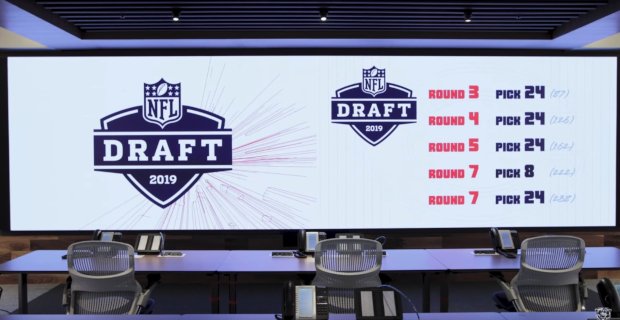 With the 24th pick in the 2019 NFL Draft, the Chicago Bears select Khalil Mack, linebacker, Buffalo. Steal of the draft some might say. Imagine trading Khalil Mack for a running back, that actually happened in 2019. Thanks Jon!

The Bears entered Thursday night with limited picks (4) after a series of trades in 2018. On the plus side they also don’t appear to have any glaring needs aside from kicker. Hard to believe when you think of the last 10 years as a Bears fan, but here we are. With the departure of Jordan Howard this offseason, the Bears brought in Mike Davis but many felt there was still a need for an all purpose back.

The Bears entered Friday with the 87th pick but we all knew Ryan Pace couldn’t keep it in his pants after not having a 1st or 2nd round pick. On cue, Pace swapped 4th rounders and sent a 5th and a 6th (2020) to the New England Patriots and selected running back David Montgomery 73rd overall.

Montgomery was a beast for the ISU Cyclones, racking up 2,362 rushing yards and 24 touchdowns in his last two seasons. Montgomery is also a capable pass catcher (something Howard was not), hauling in 58 receptions over that time span. While the numbers look great, Montgomery isn’t a perfect player. He does lack breakaway speed and overall athleticism.

That said, he sets up as a perfect compliment to Tarik Cohen. Montgomery showed a unique blend of power and elusiveness at ISU. He forced the most missed tackles in college football from the running back position over the last two seasons (185). Overall, I think this was a great pick for the Bears. It adds depth, and gives Nagy his new and better human version of Kareem Hunt.

Bears fill the void from this offseason's Jordan Howard trade

I wish I was as enthused about the Bears 4th round pick. In what is already a crowded wide receiver corps, the Bears added Georgia WR Riley Ridley.  I really thought this was a wasted opportunity to add some needed depth on the defensive end. The Bears had some of the best health in the league in 2018 and surely won’t be as fortunate in 2019. Ridley comes from a great program but he is a sub par athlete and has never really produced at any level. He had 9 touchdowns as a Junior but only totaled 559 yards. According to the Podfather himself, “Rildey is like global warming” despite all the evidence he isn’t good, tape grinders keep hyping him up. Hopefully I’m wrong but I just don’t get this one.

In the 6th round the Bears selected CB Duke Shelley out of Kansas State. While this is certainly a position Bears could use some depth, Shelly wasn’t necessarily on our radar. But Pace is gona Pace and when digging a little bit deeper this pick looks like it has some promise. According to Pro Football Focus Shelley had the highest coverage grade of any any Big 12 cornerback and ranked in the top 10 in FBS in overall grade with an 89.9. At age 22 Shelley should have a chance to grow in this dynamic Bears defense.

Again, this seemed like another spot to add some defensive depth but Pace opted to take another running back in Kerrith Whyte out of Florida Atlantic. Whyte figures to mix in with Cordarrelle Patterson in the return game where he showed some explosive ability at FAU. Other than special teams, Whyte doesn’t figure to get much time in 2019 but could potentially step into the Cohen role  if God forbid something happens to him.

Wrapping up, the Bears took conerback Stephen Denmark out of Valdosta State. Denmark is a big boy, at 6’4″ 216lbs and figures to lay some wood on opposing WR if he can get some playing time. At this point it is difficult to say how much Denmark can contribute at the next level but he is the exact type of freak athlete you want at the end of a draft.

Overall this draft just didn’t have the capitol to be overly exciting. I think Montgomery in the 3rd hit on an essential need and could be a home run in real life and fantasy football. Taking Ridley in the 4th instead of adding defensive depth really put a damper on this draft. Ridley’s lack of production and unimpressive athletic profile make him a long shot to contribute in the NFL. Rounds 6 and 7 are essentially dart throws but I think addressing the CB position was a great move, especially when it’s with athletic freaks with upside.