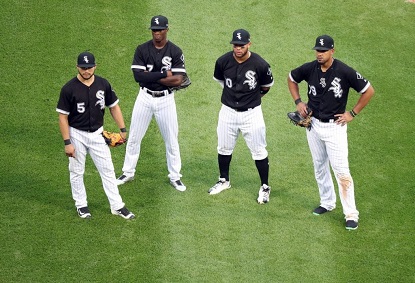 The White Sox wrapped up spring training this week with two wins against the Arizona Diamondbacks and four straight to finish with a less than stellar 12-17 record. We all know records carry little weight during spring training, so I won’t put too much stock in this. In fact, I’ll make ignoring all the bad stuff and only concentrating on the good the theme of the 2019 South Siders. The team has been using the Tim Anderson “ride with us or get run over” quote to hype up the fan base, but I think a more appropriate line will be “yeah we’re not good, but did you see they’re giving away cool Hawaiian shirts?” I’ll get into that later, but there is plenty to be excited about this season.

Yoan Moncada absolutely tore it up in the Cactus League and I am buying this resurgence. The newly minted 3rd baseman batted .358 to go along with 11 walks, 9 RBIs and a scorching .469 OBP. That’s good enough to win the first annual 2019 Cactus League Straight Flames *fire emoji 3x* Award. The award created in attempt to reach a word count. It wasn’t all hot in AZ though as Moncada tied for the team lead in strikeouts with 16, but I won’t be worried by that if he continues to produce in all the other categories. In addition to his bat, he’s always been an elite defender and helps fill a hole at 3rd base that has been missing since #neverforget Joe Crede while at the same time creating an opening for #FutureSox stud, Nick Madrigal. The starting 2nd baseman of the #WhiteSox2020 (opening day not guaranteed).

Speaking of #FutureSox, some minor leaguers who had promising showings this spring include Madrigal, Luis Robert, Blake Rutherford, & Micker Adalfo. All of whom (whoa) I expect to see in Double A at some point this year. They continue to provide reasons to buy into the everlasting rebuild and frustrating front office. The prospects are climbing the ranks and we’re on the brink of competing. 2019 is officially the last year of the rebuild.

It wasn’t all good news this spring though as we lost Dane Dunning to Tommy John surgery. The minor league ace dominated Single and Double A last year and would have 100% pitched for the White Sox at some point this season. Another tough loss for the pitching staff as Dunning will miss all of the 2019 season and part of 2020. It looks like he’ll make the comeback right in the midst of next year’s successful campaign and provide the additional boost needed to capture the 2020 AL Central.

Part of my optimism comes from the newly signed contract for top prospect, future All Star, Hall of Famer, and potential friend Eloy Jimenez. The man earned a 6 year, $43 million deal without playing a major league game. The contract includes options for an additional 2 years for $35 million which potentially keeps the outfielder on the South Side through 2026. The window for a World Series opens next season and Eloy needs to be the lynch pin for those playoff runs. I believe in the hype and have no doubts he’s going to be an absolute monster.

All of this is great, but none of it matters once Thursday comes around and the 2019 MLB SEASON BEGINS. Spring training is a great taste that provides a look into the future, but now it’s real and now it counts. The White Sox are tied with 30 other teams at 0-0 and I am pumped. My hopes aren’t high for the season, but anything can happen at this point. More prospects will be funneling up to the majors this season and the players that are here are going to start performing. A team that has Jose Abreu, Eloy Jimenez, and Yoan Moncada playing well is a team that can make the playoffs. Our bullpen looks solid after some offseason acquisitions while our rotation is up in the air. We will need Lucas Giolito to pitch much better than he did this spring, but I expect Carlos Rodon and Ronaldo Lopez to take the lead and the reliable Ian Nova to be a source of steadiness. Rodon has low key Cy Young potential and an 18-6 record could move this team right past the Cleveland Indians into first place in the division, or at the very least lock us in to a Wild Card spot. Will this happen? Almost guaranteed no. But, it’s the end of March and no one knows what’s in store for the next six months.

I included a season prediction my last time around and will stick with what I said then which is an 82-80 record to go along with a 3rd place finish in the AL Central. The pitching is a question mark, the lineup has unproven talent outside of Abreu, and overall we are just not ready. The fact that we don’t seem ready also somehow gives me faint hope that we will put the pieces together one year early and shock the league with a 2019 playoff push. Though this is unlikely, it gives you an idea of the delusion I live in as a White Sox fan. At the very least, I’m going to snag a sweet Hawaiian shirt this season. Let’s Go Sox and Let’s Go Sox Fans! One more year without playoffs, we can do it!