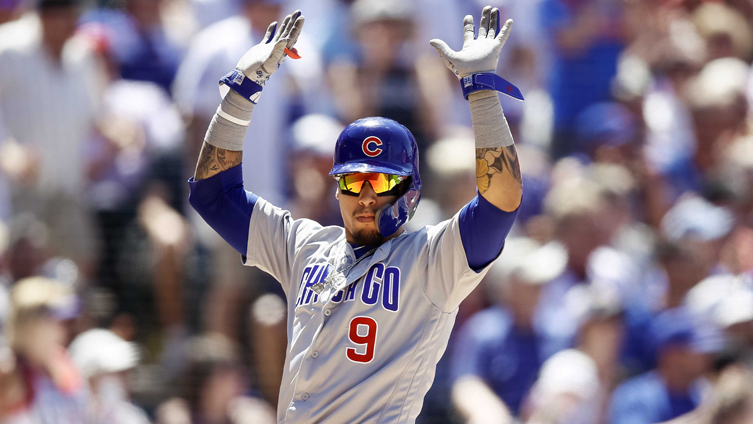 A 2-5 road trip didn’t hurt the Cubs much, as they remain a game out of first place

The Friendly Confines were particularly so for the Cubs last week, as they enjoyed a 6-1 record during their most recent homestand. Once again, though, they failed to bring that momentum with them on the road, turning in a 2-5 trip against the Rockies and Dodgers.

This week was circled by Theo and Co. before the season began as a particularly tough test. How much that preparation factored in is unclear, as the Cubs were outhit by the Rockies and stymied by the Dodgers, albeit in some close contests.

The good news? The first-place Brewers struggled as well, managing only a win apiece against the Astros and last-place Giants. So while both teams fared poorly, the Cubs knocked some tough games off the schedule and will be well within striking distance after their much-needed rest on Monday.

The Cubs grabbed two of three from the red-hot Rockies at Wrigley last week, but Colorado showed why they’re a threat by returning the favor at Coors Field. The Rockies took the first two games from the Cubs, but the Northsiders salvaged the finale 10-1.

The first game looked to be going well enough. After a couple of scoreless innings, the Cubs homered three times in one inning off Germán Márquez, jumping out to a 4-0 lead. But it was short-lived, as two-run blasts by Charlie Blackmon and Nolan Arenado knotted things up in the bottom of the third against Yu Darvish.

The teams traded more zeroes, but it was the Rockies who finally broke through in the seventh and again in the eight, leading to a 6-5 loss for the Cubs.

In the second contest, the Cubs got their second crack at rookie starter Peter Lambert, and once again they failed to solve him. He held the Cubs to 1 ER in 5 IP, giving the Rockies offense ample time to pile up runs against José Quintana and (sigh) Brad Brach.

(Craig Kimbrel is set to get up to speed with the Iowa Cubs, so the end of Brach’s tenure may soon be upon us.)

The Cubs went off in the finale, though things looked hairy for Cole Hamels in the first inning. After he escaped a bases-loaded jam, though, the Cubs struck for five runs in the second, and the Cubs were cruising. Kyle Schwarber homered, and after some beanball bullshit Javy Báez decided he’d had enough of that nonsense and put the cherry on top of a 10-1 win.

The Dodgers have maintained a stranglehold on the best record in the NL, but the Cubs had some hope coming into this series after winning two of three at Wrigley in April. The Dodgers responded, however, winning three of four closely contested games.

Things started off well for the Cubs in the first game. Schwarber crushed the first pitch of the series for a home run off Clayton Kershaw, and the Cubs added two more runs for a 3-0 lead. But Jon Lester couldn’t keep the ball in the yard. He gave up a pair of two-run homers in the fourth as the bats fell silent in a 7-3 final.

Things started off well for the Cubs in the second game. Anthony Rizzo crushed a Rich Hill curveball for a 2-0 lead, and yeah, this game looked a lot like the first. Unfortunately, those similarities included the Dodgers taking the lead off Kyle Hendricks in what came out to a 5-3 result. Hendricks, meanwhile, has hit the 10-day IL with a shoulder issue, though it seems (hopefully) minor.

In the third game, the Cubs were shut down from the very beginning. Dodgers starter Walker Buehler faced the minimum through four innings, but Darvish was also sharp, turning in his best start in a Cubs uniform with a line of 7 IP, 2 H, 1 ER, 1 BB, 10 K.

Darvish looked to be on the hook for a tough-luck loss, however, as Buehler gave up no runs through seven innings. But Rizzo came through for the Cubs in the ninth, depositing a Kenley Jansen pitch into the Cubs bullpen in right field and delivering a 2-1 Cubs victory.

The Cubs lost the finale in prime time by a one-run margin. Quintana looked shaky in the first, walking three batters in the frame, but settled in for five decent innings of two-run ball. Hyun-Jin Ryu was as untouchable as he’s been all year, but the Cubs scratched across a pair of unearned tallies. The offense could do little else, though, and ultimately the Dodgers secured a 3-2 win.

While losing three of four (and five of seven overall on the road trip) looks bleak, the Cubs competed in just about all of these games. Only two of the five losses were decided by more than two runs, and the Cubs led at some point in all but one of these games.

A guy like Kimbrel, and possibly another bullpen lefty before the deadline, is the perfect weapon for winning more close contests against tough teams on the road.

The Cubs will host the White Sox for two games and the Mets for four this week, hoping to pile up wins at home.

The way the Cubs have played at Wrigley, a two-game sweep of the Southsiders is a safe bet on most of the betting sites. If you’re looking for a chance to beat the spread and bet against the Cubs, however, Lucas Giolito’s start against Lester on Wednesday is promising. The White Sox have won his last nine starts, and Lester has turned in a few shaky outings of late.

Following that, the Mets come to town for a four-game set. New York has largely struggled in 2019, managing just a 34-37 record to this point, and the Cubs seem poised to take three of four, continuing their winning ways at home.