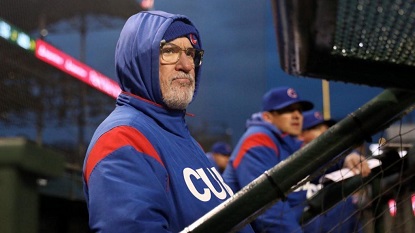 After a rough start, the Cubs picked up some wins at home

The Cubs got off to a pretty horrific start, but last week I still tried to look on the bright side and offer my hot take: They’re not actually an awful team.

Still, a 2-7 start is a 2-7 start, and a bad beginning to the season stings whether you’re the Cubs or the defending World Champion Red Sox (who sit at 6-11).

The team was clearly eager to finish up the long nine-game road trip that kicked off the season and get back to the Friendly (if chilly) Confines. There, things looked much more promising, as the Cubs ended up taking two of three from the Pirates and going 3-2 overall on the brief homestand.

Even though both Cubs starting pitchers and relievers ranked 29th in the majors in ERA as of my last writing, I was still holding out hope for the starting rotation to turn things around.

They didn’t disappoint, for the most part; Jon Lester’s start was cut short with what’s hopefully a minor back issue, but he gave up no runs and generated plenty of swings and misses. The Cubs won his start 10-0.

Yu Darvish gave up four runs on five innings, but really his line doesn’t tell the story. He worked quickly, never got into a three-ball count, and struck out four against zero walks. Three of his runs came on fluky homers, while the others were let in by the bullpen in the 5-2 loss.

The Cubs took the rubber game of the series 2-0 on the back of a masterful performance by José Quintana, who struck out 11 over seven innings of shut out baseball. Not to be outdone, Cole Hamels pitched eight innings of one-run ball against the Angels for a quick 5-1 victory.

Only Kyle Hendricks truly struggled this time through the rotation, giving up only two runs but not making it past the fifth innings. Despite that blip and Darvish’s odd outing, Cubs starters were overall promising.

The Cubs bullpen suddenly found its mojo during the homestand – and then lost it just as quickly in Saturday’s 6-5 loss to the Angels.

They started off strong, pitching seven shutout innings of relief behind Lester’s early exit, and while Kyle Ryan allowed both of his inherited runners to score in the next game, they managed scoreless relief innings to finish things off.

The bullpen didn’t get into real trouble until that final game – but when they did, it was ugly. Brad Brach came in and couldn’t throw strikes, allowing a hit and three walks before being lifted for Randy Rosario, who promptly walked in another run.

In total, the bullpen walked six batters and put the game out of reach. The Cubs offense battled back late, scoring three runs in the final two innings, but it wasn’t enough to surmount the four-run lead the Angels built against the Cubs bullpen.

A 3-2 homestand isn’t ideal, and neither is a 5-9 record to start the season. But both are better than being 2-7 with no series wins.

The Cubs offense continued to put up big numbers, while Cubs pitching proved to not be completely inept. The starting rotation showed great signs, with 35-year-old Hamels picking up where he left off, and the bullpen took some steps forward despite the poor showing on Saturday.

While 4-1 was very much in reach if not for the bullpen, or at least 4-2 had Chicago weather not forgotten that it’s fucking April, the Cubs showed signs of life – and their 10-0 home opener proved this team will be a force to be reckoned with if it can really get going.

This week, the Cubs will try to really get things going. They’ll make a brief trip to Miami to face the hapless Marlins (4-12) before returning home to face the Diamondbacks (7-9).