Cubs Spring Training: Hot hitters, but who can pitch 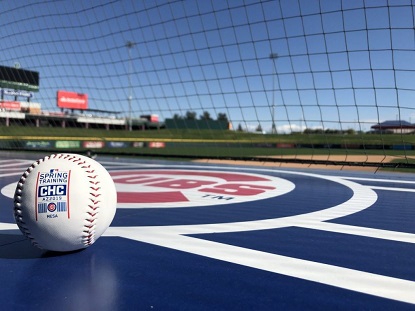 Small samples aren’t as kind to Cubs pitchers in Arizona

A couple weeks ago, I took an early, early look at what Cubs players were shining bright in Mesa. That list was six players long, and five players were hitters – because it’s hard to get a true read on pitchers until they’ve trotted out there more than a couple of times.

Pretty much all those hitters have stayed hot. Trent Giambrone and Cristhian Adames are still raking, and Schwarber and Contreras look ready for the regular season. The only player who hasn’t looked as good has been Bryant, and it seems pretty unlikely that he’ll be someone to worry about.

But now, with Opening Day less than a week away, the time is ripe to see what kind of pitching the Cubs have – by, you know, looking at meaningless pitching stats from meaningless games.

And… well, it’s not great, to be honest. Maybe it’s the dry Arizona air, or maybe everyone’s just “working on things,” but players the Cubs will be relying heavily on – Cole Hamels and Jon Lester, for instance – are sporting ERAs north of 5.00.

But it’s not all bad – there are a few guys who’ve toed the rubber for the Cubs and looked sharp. So here are some Cubs pitchers who’ve done good work this spring.

Darvish gave every Cubs fan a heart attack a few days ago when, after firing a slider in the fifth inning of a game against the Mariners, the Cubs pitching coach and training staff came out to check on the righty. Ultimately, they pulled him from the game, but the diagnosis was merely a blister – nothing serious.

That’s lucky for the Cubs, because Darvish has looked like the pitcher the Cubs thought they were signing before 2018. In 12 innings, he’s allowed just 3 ER (for a 2.25 ERA) and struck out 14 batters.

His outing against the Mariners was solid in particular, as he let up 2 ER and struck out six in 4.2 innings before being removed.

The Cubs rotation is relying pretty heavily on aging starters like Cole Hamels and Jon Lester, but if Darvish can step up and pitch like he has in the past, he could be the true staff ace.

Before the Cubs’ afternoon split-squad game against the Rangers on Friday, “Q” was already having a solid spring. Over nine innings, he had allowed only 2 ER with a miniscule WHIP of 1.00 – solid numbers more in line with what he did on the South Side than with his 1.6 fWAR with the Cubs in 2018.

But while those numbers look good, he improved on them in his last start of the spring – he tossed six innings against the Rangers, allowing just 1 ER while striking out six batters and walking none.

Like with Yu Darvish above, the Cubs might have to expect a lot more from the likes of Q, Darvish, and Hendricks if the older guys carry their shaky Spring Training numbers into the regular season.

You might not remember him, but Webster actually pitched for the Cubs last season. He only made three appearances, giving up two runs in the process, but he did exist on the roster.

With the Cubs bullpen largely in flux, though, Webster is making an excellent case for keeping him around. He’s pitched 11 innings this spring, giving up just 2 ER while fanning 11 hitters.

Prior to last season, he hadn’t seen MLB action since 2015, and he’s since converted from a starter to a reliever. But he might become a valuable part of a Cubs bullpen that will have a couple vital pieces (Morrow and Strop) missing on Opening Day.

Oh, right – made that joke already.

But Ryan is even more under the radar, as he still hasn’t pitched in the big leagues since the Detroit Tigers sent him to the minors in 2017. Last year at AAA Iowa in the Cubs farm system, Ryan had a very nice season, putting up a 2.86 ERA over 66 innings. He’s carried that success over into the spring on the heels of his shiny new major-league deal with the Cubs – in 10.2 innings, he’s notched a 3.38 ERA.

That’s not nearly as impressive as Webster’s numbers, no – but Ryan is a lefty, and the Cubs will need all the left-handed help they can get, especially with Brian Duensing and Randy Rosario rocking ERAs near 10.00.

Why am I grouping these guys together? Because the Cubs will need them to be rock-solid linchpins, especially without Strop or Morrow at the beginning of the season, and they’ve both looked good in just a handful of appearances.

Edwards has given up just 1 ER over 4.2 innings, striking out six batters with his fancy new delivery – he could maybe do without hitting batters intentionally in Spring Training, though.

Steve Cishek, on the other hand, has yet to give up a run. He’s thrown 4.1 innings and struck out four, and after throwing an insane 70.1 innings last season, he looks to be doing fine.

So there you have it – these are all still small samples, and it’s hard to predict pitching from Spring Training numbers. But while the older guys on the Cubs roster sort themselves out and gear up for yet another season, it’s nice to see some other options looking solid right away.