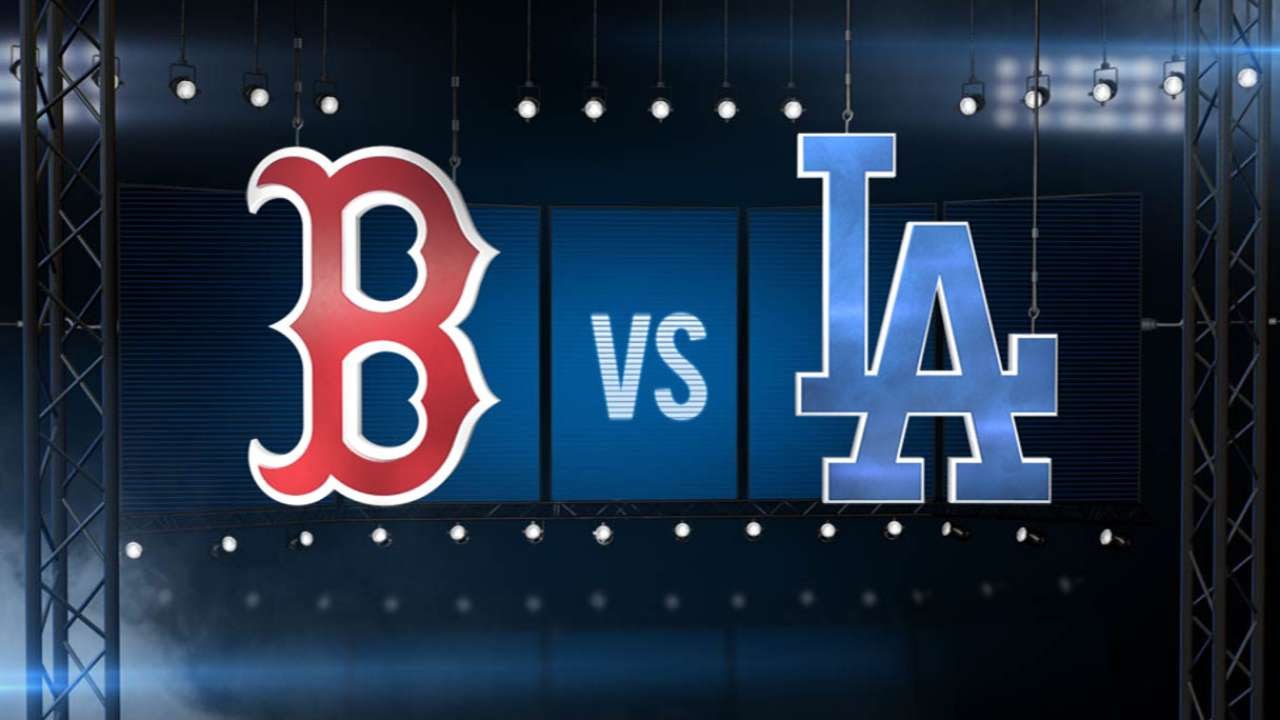 Despite their load of talent and big payroll, the Dodgers came into the 2018 World Series as clear underdogs, their 92 wins dwarfed by Boston’s 108.

Now they’ll have to take four of five from the Red Sox if they want to dodge the dubious distinction of losing the World Series twice in a row, having dropped Games 1 and 2 at Fenway, 8-4 and 4-2.

Here’s how the games played out, and what the Dodgers need to do to avoid this series ending before it heads back to Boston.

Game 1: Close until it wasn’t

Neither Chris Sale nor Clayton Kershaw managed to go longer than four innings for their respective squads.

The Dodgers chased Sale in the fifth with a game-tying run before the Red Sox responded with two runs of their own in the bottom half, both of which were charged to Kershaw. LA pulled to within a run, at 5-4, but Julio Urias and Pedro Baez each allowed runners to reach before Alex Wood came in, facing pinch-hitter Eduardo Nunez.

Nunez decided he’d had enough of this back-and-forth nonsense, depositing a line shot homer over the Green Monster for an 8-4 lead, and there the score would stay.

I mentioned David Price as one of the key players to watch for the Red Sox – because despite all their offense, they’d have a hard time taking a 2-0 lead if he didn’t show up for Game 2.

But they did, because he did.

It wasn’t as dominating as his last postseason performance, but if you can hold the other team to two runs like Price did, odds are the Red Sox will win. Price tossed six innings, the longest outing of any World Series starter thus far, and he gave up just three hits while striking out five.

The Dodgers led the game briefly after scoring two runs in the fourth, but things could have been a lot worse, as LA had the bases loaded with no outs. Price buckled down, getting Matt Kemp to fly out and allowing just a single after that, sandwiched between two strikeouts to get out of it.

The Red Sox took the lead for good an inning and a half later, capitalizing on Dave Roberts’ decision to sub in Ryan Madson instead of one of his more reliable bullpen pieces and winning 4-2.

So the question is: already down 2-0, how can the Dodgers come back?

Bring the bats back

The Dodgers need to hit, plain and simple. The Red Sox offense will put up runs no matter who you trot out there, and the only way to win is to hope they don’t get too far ahead and score some frickin’ runs.

They could start by hitting with runners in scoring position. On the series, the Dodgers are just 2-for-10 with RISP, and they’ve left 11 runners on base. But of course, you’ve got to get runners on to leave them there – and despite scoring four runs in Game 1, LA turned around and managed two on three hits against Price.

Worse: After the fourth inning, they did literally nothing on offense, failing to get a single man on base in their last 16 tries.

I’m sure David Freese’s back is hurting, because he’s the only one in the World Series who’s notched an OPS over 1.000 – or over .700, for that matter. Almost no one is hitting, and when they are hitting, it’s not for power – Kemp has the Dodgers’ only extra-base hit, a solo homer in Game 1, and it’s his only time on base in eight tries.

This Dodgers offense put up a ton of runs, and they’ll need to do that at Dodger Stadium over the next three days if they want to push this series back to Boston.

You’ve probably already heard how much the Red Sox have been scoring in this postseason with two outs. They haven’t slowed down in the World Series, scoring nine of their 12 runs with two down, which has to be the most frustrating stat to hear if you’re the Dodgers.

Game 2 was a microcosm of this: Hyun-Jin Ryu looked to be rolling along just fine into the fifth inning with a 2-1 Dodger lead. He got Ian Kinsler to groundout on the first pitch, and Jackie Bradley Jr. popped to short on the second pitch he saw.

Then he got ahead 1-2 on Christian Vazquez – who singled to right.

Then he got ahead 0-1 on Mookie Betts – who singled to center.

Then he got Andrew Benintendi into a 3-2 count – before he walked.

Madson enters, walks Steve Pearce on five pitches to force in the tying run, and lets up an

It doesn’t matter how they do it, but the Dodgers need to be the team that figures out how to push the right buttons when the Red Sox start getting men on with two outs. Madson was the wrong button.

It’s the fifth inning, but why not throw Urias, Baez, or, hell, Jansen? Saving your closer until the end of the game makes sense unless you can’t get to the ninth with the lead. The Dodgers haven’t, and Jansen has yet to see action in the World Series.

Sure, maybe channeling Craig Counsell’s usage of the Brewers bullpen isn’t the move, but Dave Roberts will have to be a lot faster at identifying the right out-getter when Boston starts working its two-out magic.

If he can’t, it’s already over. Clinching at Fenway would be fun for the Red Sox – but so is a four-game sweep.

Game 3 will pit Rick Porcello of the Red Sox against rookie fireballer Walker Buehler of the Dodgers. The Red Sox look to push the Dodgers to the brink of elimination, while Los Angeles will hope facing a right-handed starter gets their big left-handed bats untracked.