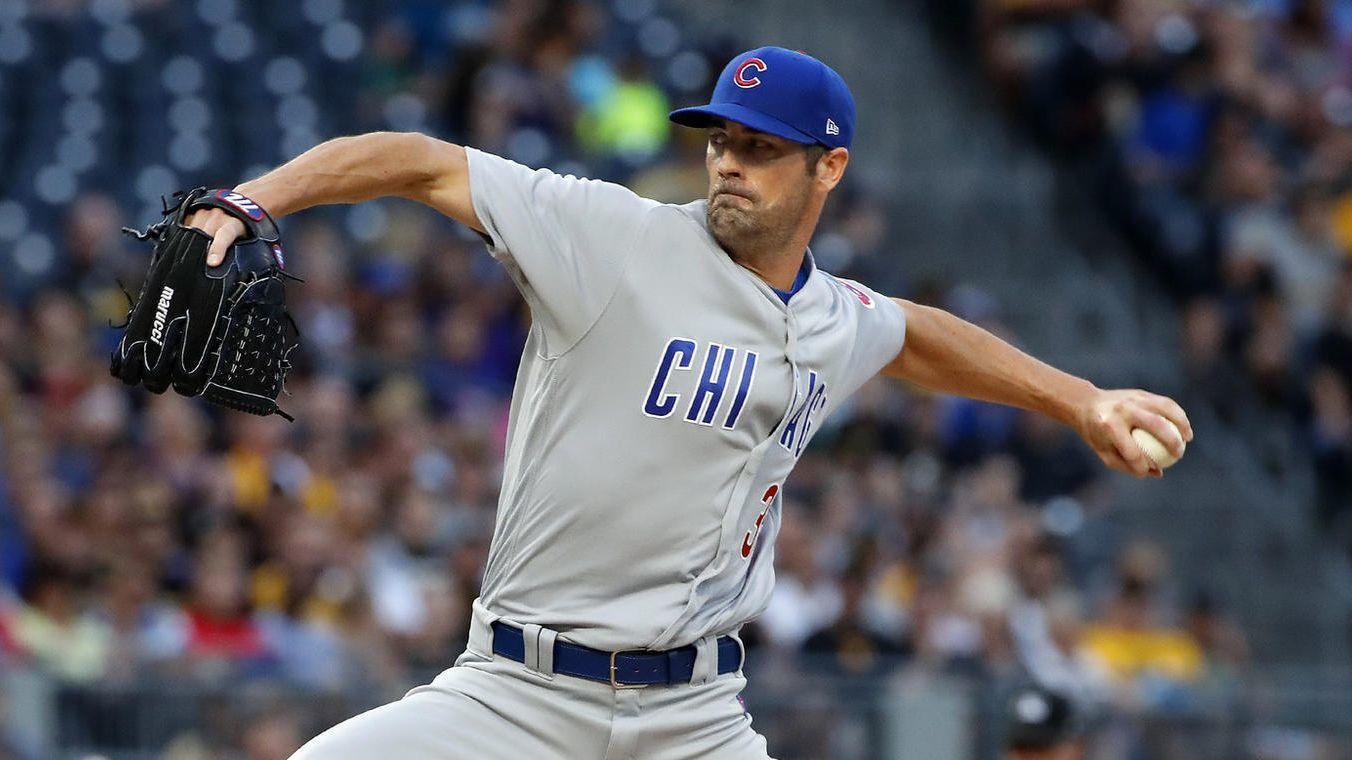 Back when the Cubs traded for Cole Hamels, it seemed foolish to think he’d do anything approaching what Justin Verlander did for last year’s World Series champion, the Houston Astros.

All the Cubs needed was innings and stability – someone who could trot out there every five days and be decent. Imagining anything more seemed ridiculous.

But imagine, some did.

And then Hamels took the mound, twirling brilliant start after brilliant start throughout the month of August, giving up 3 ER in 39 innings – less than half of what he gave up (7 ER) in his last five innings in a Rangers uniform.

The raw stats already put Hamels at a level just as good as (if not slightly better than) Verlander. In August (six starts), Hamels pitched 39 innings (compared to 34 innings in five regular season starts for Verlander), compiling a 0.69 ERA (vs. 1.06) and a 2.29 FIP (vs. 3.09) that shows it hasn’t all been a fluke. Verlander compiled 1.8 bWAR with the Astros last season, while Hamels surpassed that mark in August. And on top of all of that, the calendar just flipped to September – so Hamels has several more starts to put in and keep building that resume, while Verlander’s regular season line is already complete. But it’s one thing to just compare their stats – and this trade takes on an entirely different light when you look at something else.

The Cubs rotation, when they added Cole Hamels, was trashed, to put it bluntly.

There was that FanGraphs article in late July, of course, describing how the 2018 Cubs rotation was out to be among the worst in the team’s history. There was the fact that Cubs starters made it through 6+ innings just 42 times out of their first 100 games.

There was Tyler Chatwood forgetting how to throw strikes, and there was Yu Darvish being ineffective – then shelved for the remainder of the season. Jon Lester’s peripherals blew up in his face, and Quintana had been unpredictable all year.

This was enough to make me say that all the Cubs really needed from Hamels was another able body – not exactly the kind of high bar one would expect to be set on a playoff contender. But Hamels has delivered just that, making it through at least 6 innings five out of seven times and 5 innings every start thus far, including the Cubs’ first and only complete game of 2018 through August.

Meanwhile, the rest of the Cubs rotation seems to have stepped up, and they look like they’ve been revitalized by Hamels’ presence. It seems weird and flippant to say, but that 0.69 ERA is gravy compared to Hamels’ ability to immediately anchor the rotation and spell a taxed bullpen – one that’s been dealing with injury troubles of its own.

But there’s another reason Hamels has already made a bigger contribution than Verlander did.

The Cubs were shaky – and the Astros were already stellar

For everything that’s gone wrong for the Cubs rotation this year, last year’s Astros had one of the strongest rotations in the majors – before they added Verlander.

Switching to FanGraphs for a second here, we find the 2017 Astros ranked seventh in the MLB with 14.8 wins accumulated by their starting staff. If you remove Verlander’s contribution, that puts them at 13.7 – still seventh in the MLB. The Cubs, meanwhile, are languishing at just 20th in the majors, with 7.2 fWAR coming from their starters. Taking out what Hamels has done, though? That puts them at 23rd with 5.6 fWAR – behind the Blue Jays (6.1) and just ahead of the horrific Royals (5.2), who will almost assuredly lose 100 games. Yes, that’s a lot of numbers all at once – but what does it mean?

It means last year Verlander joined one of the strongest starting rotations in the majors, and while, yes, he pitched out of his mind down the stretch and into the playoffs, adding something good to something that’s already great just doesn’t mean as much.

What does mean a lot, though, is taking one of the shakiest starting rotations and adding a bona fide capital-A Ace to it – which isn’t what the Cubs expected, but it’s sure as hell what they got.

Put another way: Justin Verlander contributed 7.4% of the Astros’ starting rotation’s WAR. Cole Hamels, through August, has put up 22% of the Cubs’. And while you might expect one guy to contribute a fifth of your starting pitching WAR over the course of a season (seeing as there are five pitchers in a rotation), you certainly don’t expect it out of a guy who joins your team in August. But that’s exactly what the Cubs have gotten.

There’s one factor that I have yet to account for, and that’s what Verlander did in the postseason. While the Dodgers finally got to him a bit in the World Series, Verlander dismantled the Red Sox and (especially) the Yankees, recording 21 strikeouts in just 16 IP to knock the Bronx Bombers out of the postseason. Surely there’s no way Hamels could do anything like that, right? Not so fast.

While his results haven’t been as good in recent years, notably his ALDS appearances with the Rangers, this is the “regained his form” Hamels. Even with those rough series, the man owns a plenty respectable 3.48 ERA in the postseason, along with NLCS and World Series MVP honors and his own Series ring, to boot.

Still hung up on those Rangers starts? You shouldn’t be. Since joining the Cubs, Hamels has faced off against the likes of Jacob deGrom and Max Scherzer, the absolute class of the NL, and exactly the kind of pitching you’ll face in the postseason.

The Cubs won both times.

When you add all of this up, there’s really only one conclusion to be made: We should be seeing how the Verlander deal measures up to the Hamels deal, not the other way around.

Considering the state of the Cubs’ rotation, their seemingly tenuous position as division leader (whereas the Astros won their division by an absurd 21 games), and the fact that Hamels has already contributed more with another month and the postseason remaining, there’s really no other way to put it.

And barring a complete reversal of fortune, this newfound ace is suddenly making this weirdly up-and-down Cubs club look like the team to beat in the NL once again.