Jesse Chavez – The Other Rangers-to-Cubs Revelation 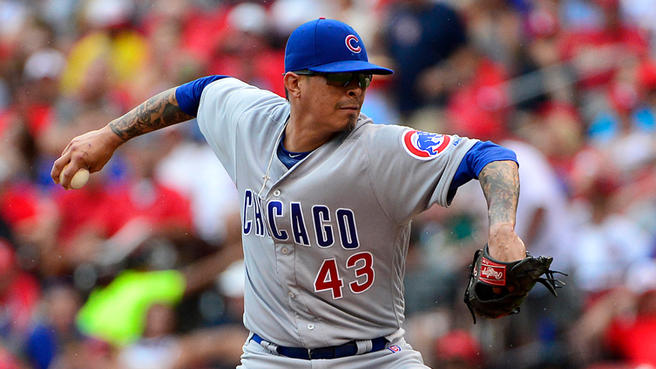 On July 27, the Cubs traded Eddie Butler and a pair of minor leaguers for two months of Cole Hamels, looking to add a veteran presence to an otherwise-shaky rotation.

About a month ago, I wrote about how all the Cubs really needed from Hamels was a decent amount of innings to spell a taxed bullpen. He’s been so much more since then, and I’ll have plenty to say about that – but what’s gone largely unnoticed is that another former Ranger started contributing in a big way just over a week prior to Hamels: Jesse Chavez.

At the time of the Chavez deal (July 19), the Cubs bullpen was overworked, walking too many batters, and had lost a big innings-eating presence in Mike Montgomery after Monty was pressed into a starting role with the injury of Yu Darvish.

They needed innings, and they needed strike throwers.

There wasn’t much spectacular about Chavez’s season with the Rangers. He put up a solid 1.1 bWAR with Texas and a respectable ERA of 3.51. His WHIP of 1.243, though – inflated by hits rather than walks – still suggested more of a middle-relief type.

But he seemed solid overall, and – most importantly – he could go multiple innings if necessary, with 56.1 IP in 30 appearances for the Rangers. And then, with the Cubs, it all started clicking.

You could chalk it up to the “Globe Life Park” effect that so many have used to explain Hamels’ success. But moving from Globe Life to Wrigley Field doesn’t make you strike out more batters and walk even fewer (Chavez’ strikeout-to-walk ratio blew up, from 4.17 to 14.00 with the Cubs), and it certainly doesn’t cut your WHIP almost in half, from 1.243 to an otherworldly 0.771 with the Cubs (prior to Saturday night).

Chavez has been nothing short of a revelation, and it’s not because he’s been lucky – his 1.16 ERA since joining the Cubs is backed by a higher (but not unreasonably so) FIP of 2.12. He posted 1.1 bWAR with the Rangers in 56.1 IP, and has already matched that mark in less than half the time – 1.1 bWAR in 23.1 IP with Chicago.

And while Cole Hamels has been busy posting 2.2 bWAR in a Cubs uniform in his 39 innings with the team, doubling his total with the Rangers, Chavez has almost matched him, in a sense – extrapolated over 39 innings (don’t try this at home, kids), pitching at this clip would put Chavez at 1.9 bWAR.

Maybe the most impressive thing of all shows up when you take a closer look at that 1.16 ERA, because the biggest thing for a reliever (most of the time) is to keep the other team off the board, period.

Well, Chavez has done that, too – he’s appeared in 19 games with the Cubs (through Saturday), and only twice has he given up any runs whatsoever.

So Chavez, a guy the Cubs pretty much got just to eat innings, has turned into an even-more-valuable Mike Montgomery out of the bullpen, giving not just multi-inning mop-up performances, but quality, shutdown appearances.

In a season where high-dollar offseason relief signings just aren’t panning out, the Cubs have found one of their most valuable relief assets pretty much off the scrap heap – for basically nothing.

That’s almost as cool as wearing sunglasses at night.