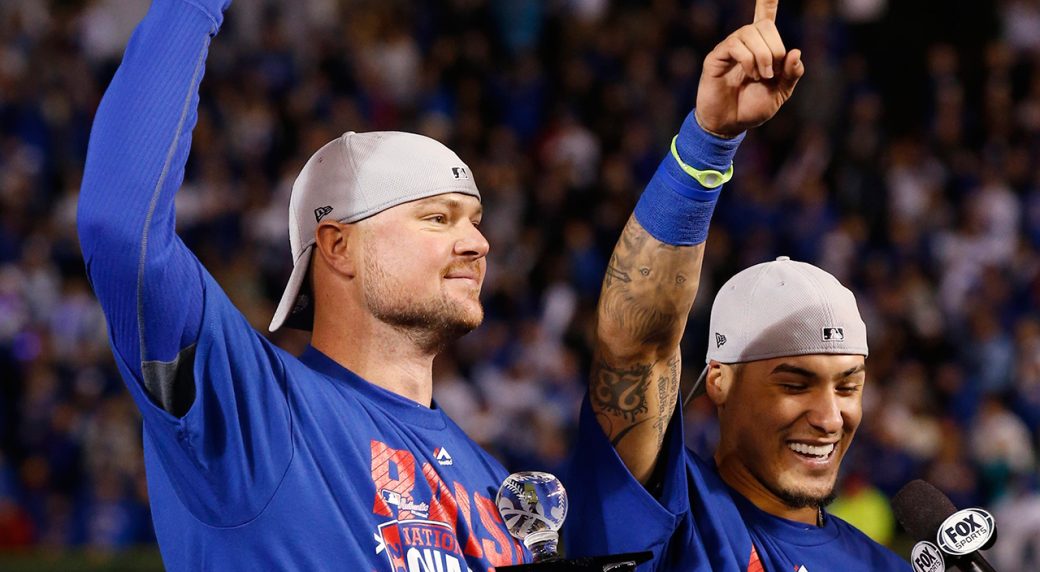 If you asked me – or anyone who follows the Cubs – about the most likely Cubs representatives for the team taking the field for the All-Star Game on Tuesday, the names would be pretty predictable.

Kris Bryant. Anthony Rizzo. Maybe someone in that relief corps.

I would’ve gotten one right, too: Willson Contreras has been knocking at the door of being the best catcher in the league, and he’s a deserving pick even if his power numbers are down a bit.

If someone suggested Javy Báez, I’d say “Wouldn’t that be exciting?” If they suggested Jon Lester after his pedestrian 2017, I might laugh.

So I guess the joke’s on me.

But the truth remains that Lester and Báez are among the more surprising representatives being sent to Washington this year (even though we won’t get to see Lester play, as he pitched Sunday).

Sure, the surprise isn’t quite on the level of Matt Kemp, who was below replacement level last year and cracked the starting lineup for 2018. But Báez and Lester are surprises all their own, even if it’s for completely different – and almost opposite – reasons.

He wasn’t terrible, but he was certainly mediocre and managed to put up some totally forgettable outings (like this one). And at 33 years old (during that season), you don’t expect things to get markedly better.

Seriously – for all its idiosyncrasies and just plain weird shit happening during games, baseball over the long term can be pretty damn predictable. Players improve for a while, they hit 30, and then steadily decline. You can put that on a graph – FanGraphs has one, of course, if you want a primer – and it makes a nice, satisfying curve.

At 34 years old, Lester’s on the wrong side of that curve, and he was coming off basically the worst season of his career since 2012. Sure, we might not expect him to stay at quite that low a level, but there wasn’t much reason to expect a huge bounce back. His Fielding Independent Pitching, or FIP (4.10) was right in line with his ERA (4.33), his WHIP (walks plus hits per inning pitched) was elevated, and his velocity was down.

The Cubs had gotten what they needed from him – a playoff-ready workhorse – and now it was time for him to fade over the back half of his contract.

Except he didn’t fade, and he made the All-Star team with (now) 12 wins and an ERA right around 2.50. And yeah, his peripherals don’t think he can sustain this, as his FIP of 4.30 is way higher than that, likely thanks to a low BABIP (Batting average on balls in play) against him – but that’s not really the point here.The point is when pitchers decline, they stay that way. Their velocity goes down, their runs and hits allowed go up, and they just sort of fade away in general. They certainly don’t make All-Star teams. Somehow this one did.

The complete polar opposite of Jon Lester, is Javier Báez, a human highlight reel of a man who put together a stellar first half despite doing… well, basically nothing different.

Báez has always been the sort of player who everyone loves to watch even if he’s not the best one out there. I could post mountains of highlight videos from YouTube, but let’s just go with a compilation of his tagging because seriously, who can form a one-man highlight reel just by tagging people??

So he’s fun. A lot of fun. He’s Making Baseball Fun Again, and baseball needs it.

But it always seemed like for every tag and 400-plus-foot shot into the seats, there’d be an AB with Javy corkscrewing himself into the ground and flailing at sliders in the left-handed batter’s box. Still, he could be better if he just stopped doing that.

Or, you know, he could somehow get better while doing… all of that same shit.

Javy Báez is still chasing pitches. He’s still striking out a bunch. And he’s still walking a laughable 3.9% of the time – which is somehow less than he did last year. But somehow he’s managed to put up more WAR (wins above replacement) than in any other season – all in just 90 games.

He’s changed nothing and yet he’s crushed enough homers to pull an invite to the Home Run Derby (damn right, I’m watching that with him and Kyle Schwarber there) and made a last-minute push to make the starting lineup for the Midsummer Classic.

I have no other explanation for this other than: Magic.

So congratulations to all the Cubs All-Stars, but really – who saw Lester and Báez coming?