Mystic Mac is Back 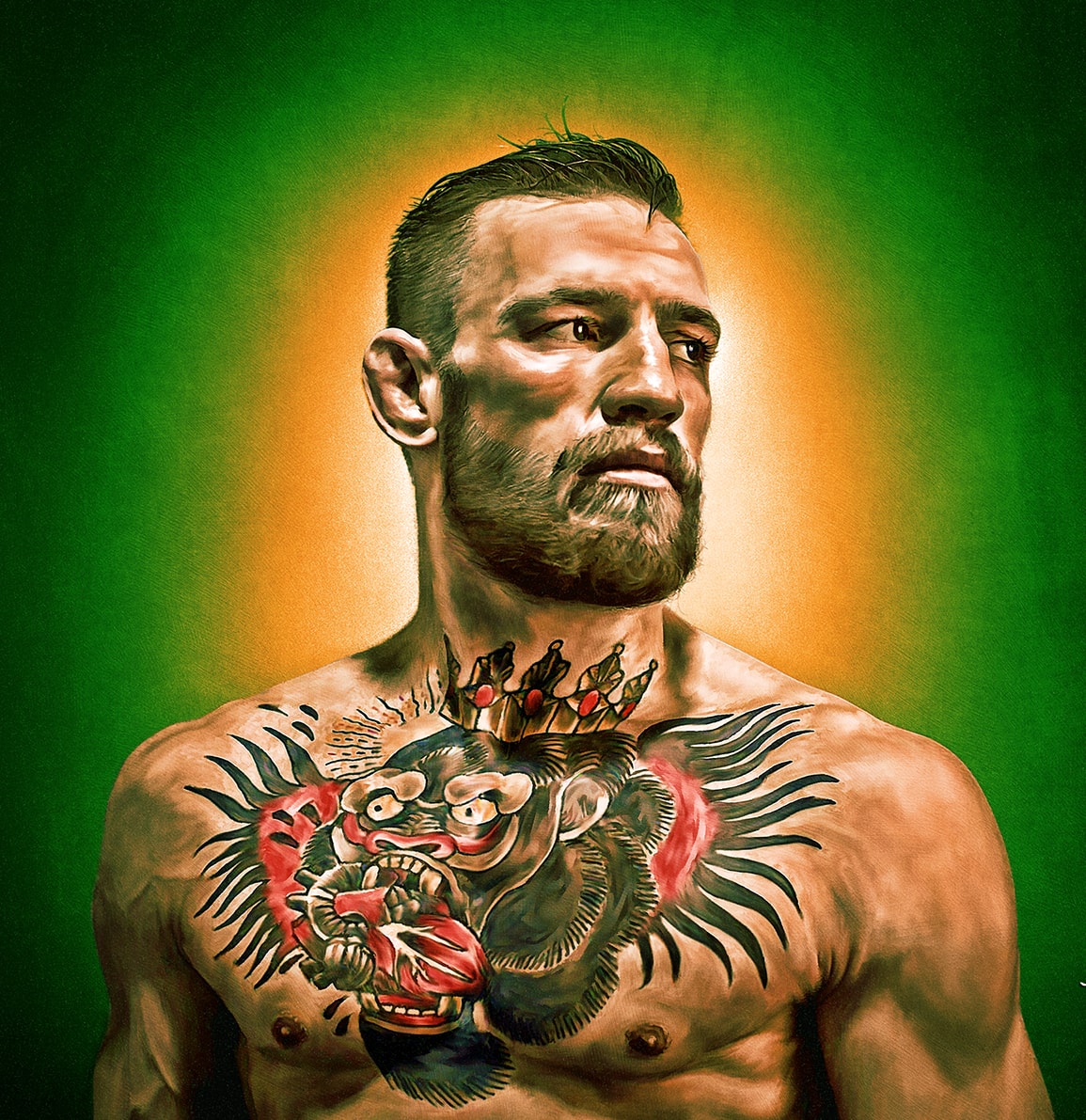 Conor McGregor vs. Khabib Nurmagomedov is better than the Super Bowl. I don’t say that lightly. Everyone knows I’m a football junkie. But if football is beer, this fight is Macallan “M” whisky.

When I found out, a feeling went through me that has lain dormant for years. It reminded me of when I was nine – waking up at 8am – Christmas morning – smelling bacon downstairs and knowing there was an N64 beneath the tree.

It was the feeling I had when I found out I got into the University of Florida. I went outside after the joyous news, when suddenly, a breeze brushed by. The air just feels different in those moments.

Sure, McGregor vs Mayweather made me excited as well, but something in me knew the outcome. Yes, I hoped against hope for a McGregor uppercut coming from the depths to deliver a knockout. In fact, I prayed for it. I literally got on my knees and asked God for the destruction of another human being. It wasn’t my proudest moment.

That being said – I knew the inevitable would happen.

The UFC is where McGregor belongs. It’s where he’s king. When allowed to use all of his weapons – he is a very scary man. Men weren’t made to be this monstrous. But sometimes, even monsters meet their match.

Khabib Nurmagomedov has never lost. Never. 26 have tried. 26 have failed. Khabib is a feared grappler who eventually takes all of his opponents down and refuses to let them up. His opponents all qualify for the #MeToo movement. This is Mcgregor’s weakness.

I mean come on, McGregor had trouble with Chad Mendes on the ground. Chad Mendes….

That being said, when Conor got up – he laughed. He walked to his stool, chuckling like a mad man. Performing whatever zen breathing exercises he has mastered – he gathered himself. The very next round, after a dangerous few minutes on the ground, he got up and delivered two thunderous blows to knock Chad Mendes out. Just like that, Conor can end your night.

Khabib’s weakness is trading blow for blow. This is Mcgregor’s strength. The clash in styles will surely be entertaining to watch, but remember – it only takes one McGregor left hand before your lights are turned off. Similarly, it only takes one Khabib takedown before it’s round three and you’re getting pummeled.

Let’s get this out of the way real quick. I am absolutely biased. I love Conor McGregor. I respect Khabib and know he is one of the greatest….but my God is he boring. Call me crazy, but I don’t like watching two men roll around in the octagon for 25 minutes. There are probably judo experts out there who get a hard on watching his technique, which I understand. Unfortunately, it’s just not my bag baby. I like watching knockouts…two feet planted…iron fist to the temple. I get a sick satisfaction seeing the synapses in the brain disconnect due to the twisting of gray matter inside of the skull. I’m primal. My testosterone is thick.

That’s what Conor is – a knockout artist. Let’s not forget, Al Iaquinta landed some major shots to Khabib’s noggin last fight. Replace his hands with Conor’s and that’s a cat nap for Khabib.

He’s also an entertainer. His gift of gab is unparalleled. He is the Muhammad Ali of the UFC. He makes WWE monologues look amateur. Literally take a break right now and watch Conor trash talk for 15 minutes – https://www.youtube.com/watch?v=Aty85JCGv40

Why do we love Conor? Why do we adore Mystic Mac?

I’m not sure why. Maybe because he chased after a dream and achieved what we all want. But is it because we really want his life? Or is it because we have been conditioned to believe that we should. Whatever it is – I love lavishness. I love confidence. I love his dedication to his craft. Usually arrogance and success create haters. Always has. But weirdly enough – everyone I talk to loves Conor. For fuck sake, my mom flew all the way to Chicago just to watch the McGregor/Mayweather fight with my friends and I. Picture this…. an apartment filled with overgrown adolescents drinking way too much Irish whiskey…and my mom, a seasoned real estate broker from Boca Raton (side note: Mom – if you get any leads from that shameless plug, you owe me a cut…don’t make me come collect woman!) Maybe it’s the Irish accent. Maybe it’s the multitude of suits. Whatever it is, his popularity knows no bounds.

Don’t get it twisted though, McGregor is an extremely hard worker. He is a phantom – behind the bravado and hubris is a former plumber who was claiming welfare before his first big UFC win.

His skill set standing up is nothing short of mastery. If you watch his fights closely you can see why:

1. His range is nasty. His extension into a punch is almost always greater than his opponents. As you can see in these 5 knockouts, he stands firm on his base and reaches in with a lean of the shoulder to keep his opponent at bay while landing atom bombs to your skull. Since his range is so long and his reaction so quick, his opponents are usually hesitant to come forward with their attack. I mean, just take a look at what happens when you do…cough ..cough Jose Aldo… (Jose Aldo Knockout) Quick update – Jose Aldo hasn’t been heard from again. Conor literally punched him into the sunken place.

I don’t want to get all Harvard on your ass, but this is simple physics bruh. When necessary, he counterbalances with his opposite hand as well. The only weakness I can see here is that when you have such a wide stance, it leaves your inner thigh open for prime leg shots. This would be a problem if you couldn’t regain balance quickly. If there is one thing I know, it’s that Conor is mad quick.

3. He is rarely on his heels. While most fighter back away, Conor usually stands firm and is ready to counter attack. This could be problematic for Khabib – who likes to jump face first into takedown attempts.

Khabib is a different animal. Born in Dagestan, Russia he is already mentally prepared for battle and destruction. I mean, come on! The man was born in a place that literally just had to dissolve their entire government because of corruption. That just happened!

At the ripe age of 8, he used to wrestle bears. Let me repeat that… HE. USED. TO. WRESTLE. BEARS. Don’t believe me? Here’s footage – (Khabib wrestling bear). Don’t you love the internet?

When he wasn’t rolling around with beasts, his dad was teaching him judo and sambo.

According to Joe Rogan – “Nobody does Ground & Pound better than Nurmagomedov”

I don’t know about you, but I believe Joe. The man knows his shit and interviews some of the smartest people on earth on a daily basis.

SIDE NOTE: If you aren’t listening to the Joe Rogan podcast, I just don’t know what you are doing…. you like being uninformed? Keep watching reruns of Friends you mindless zombies. Do us all a favor and liquidate yourselves so I don’t have to walk behind you on Michigan Ave while you dopes look up at tall buildings.

Rant over. Back to Khabib. He wants to attack and get his opponent on the ground. It’s all about control for him. If he gets Conor to the ground he will try to establish wrist control on top. If Conor has any shot of actually getting back up, he’s going to have to turn over at some point to his knees. Conor has kicked people off before from his back, but that won’t work with Khabib. From everything I have seen and read, once Khabib is on top you’re going to have to turn over if you’re going to get up.

When Conor does turn over, Khabib will want to gain wrist control. Once he controls the wrist, he takes one of Conor’s blocks away. In addition, if he applies pressure correctly, it’s very hard for Conor to stand up, since he won’t have that hand for leverage. That’s when the ass beating starts – shots to the ribs, head and face.

Bottom line: Conor will be in major trouble if Khabib can consistently get him on the ground.

So, with all of this info, I guess it’s time for me to make my biased pick.

McGregor KO in the second. Khabib will scare him in the first but McGregor will time a shot in the second. Like Conor says “Precision beats power, timing beats speed”

Now let’s boil down to the real question I have about this fight. Where do I watch it? Bottle service at Bottled Blonde? Just accept that I’ll get another noise complaint and have a party at my crib? Illegally stream it on my computer? Do I dare take the risk?