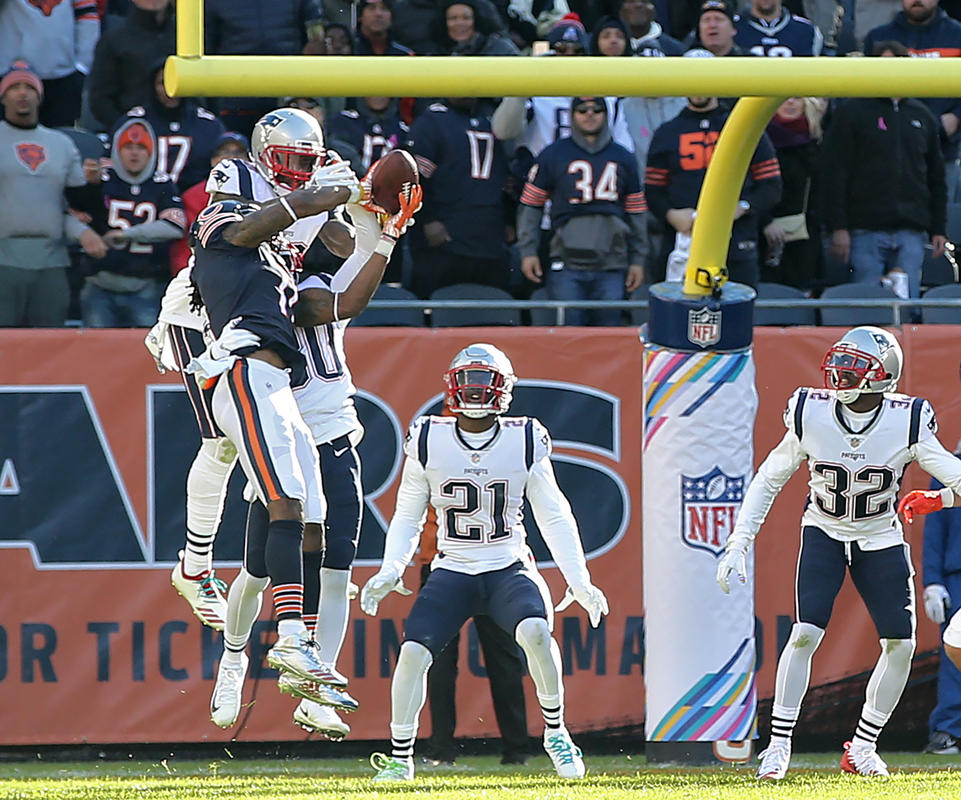 The Bears led by as many as 10 points in their Week 7 contest against the Patriots (4-1 coming into play), but it was a short-lived advantage gifted by the Patriots’ early mistakes, one that was quickly turned into a deficit by the Bears’ own miscues.

There was a lot of ugliness, some flashes of greatness, and a (nearly) successful last-second Hail Mary, but ultimately the Patriots held on for a 38-31 victory, while the Bears looked much more like the middling squad everyone expected.

The Patriots reached the endzone on their first drive, marching 75 yards in 8 plays and carving up the Bears defense for an early 7-0 advantage. After swapping punts – a feat in itself, as the Patriots never punted against the Chiefs last week – the Bears got on the board with a field goal.

Then, despite a sputtering offense, it started to look like the Bears defense might stand up to the Patriots enough to win. On the kickoff following the field goal, the Bears forced a New England fumble, setting up a lead-stealing touchdown on an 8-yard run by Mitch Trubisky, and they forced another fumble on the following possession, which turned into another TD.

That’s a 17-7 advantage, and suddenly the Bears looked like… well, something, at least.

And then they looked silly, as the ensuing kickoff was brought back to the house by Cordarrelle Patterson. More offensive ineptitude on a three-and-out put the ball back in Tom Brady’s hands, and the Patriots scored again and led 21-17 at the half.

The Bears came out strong in the second half, with a touchdown on their first possession set up by one of Trubisky’s most impressive runs yet, a 39-yard scramble that showed off both his speed and his patience. New England grabbed a field goal after that to knot things up, 24-24.

Then the Bears unraveled once more. New England blocked a Bears punt and returned it for a touchdown, and on the next two Bears possessions, Trubisky – who’d been flirting with disaster all game – was finally picked off. The Pats turned the second pick into a Brady touchdown pass and a 38-24 deficit for the Bears.

After a Bears punt, the defense finally got another takeaway, with Kyle Fuller intercepting a short pass from Brady. The Bears, in a hurry-up mode they should use more often, marched down the field and brought things to 38-31. The defense had a tough time stopping the Patriots from running out the clock, but they finally managed to do so, giving the offense 0:24 to work with and no timeouts.

The Bears needed a miracle, and on the last play of the game, they got one.

But someone must have screwed something up in sending it to them: Their miracle got them 54 yards on a Hail Mary when they needed 55. Yes, Kevin White caught Trubisky’s jump ball but was stood up a mere yard from the endzone, and the Bears came that close to overtime.

Who they thought we were

Everything that’s been shaky about this Bears team was on full display against the Patriots.

Trubisky was flighty under pressure and made repeated poor throws, and while the Patriots dropped several sure interceptions – including two in the endzone – his luck ran out late in the third quarter.

The Bears defense, meanwhile, largely contained the Patriots running attack, but continued to struggle against the pass, and had a particularly difficult time making open-field tackles and smacking away passes when they needed to. They also only got to Brady once, and Khalil Mack was pretty much a nonfactor.

It might be time to admit it: These Bears are better than they have been, but 3-3 is probably a better reflection of their true talent level than 3-1 was. While they beat squads with huge question marks in Seattle, Arizona, and Tampa Bay, solid postseason contenders like the Packers and Patriots beat them by playing four full quarters and taking advantage of mistakes.

If the Bears can keep games this close against good teams despite miscues in basically every phase of the game, they likely only need a handful of players to step things up if they want a legitimate shot at a Wild Card.

Trubisky, for instance, has shown flashes of brilliance, but is prone to panicking and forcing passes when hit with significant pressure. If he can be consistently reliable – not even great – the Bears offense becomes a lot scarier.

On the other side, the Bears defense is already good at taking the ball away – they just need to show they can defend against a capable passing attack to be rock-solid.

Of course, we’re heading into Week 8, so it’s a bit difficult to expect significant development or changes before it’s too late, and after leading the division (told you it wouldn’t last), they’re back down to last. But it doesn’t seem like it will require particularly big changes for this team to be in the hunt. And in this game, all it takes to contend is a ticket to the playoffs.

If the Bears do want to stay in the hunt, they’ll need to keep beating mediocre-to-bad teams. On the mediocre side, the Jets (3-4) will visit Soldier Field in Week 8, while the Bears will head to Buffalo in Week 9 to face the sputtering Bills (2-5).

Two wins would make things look a lot better for the Monsters of the Midway. #BearDown.