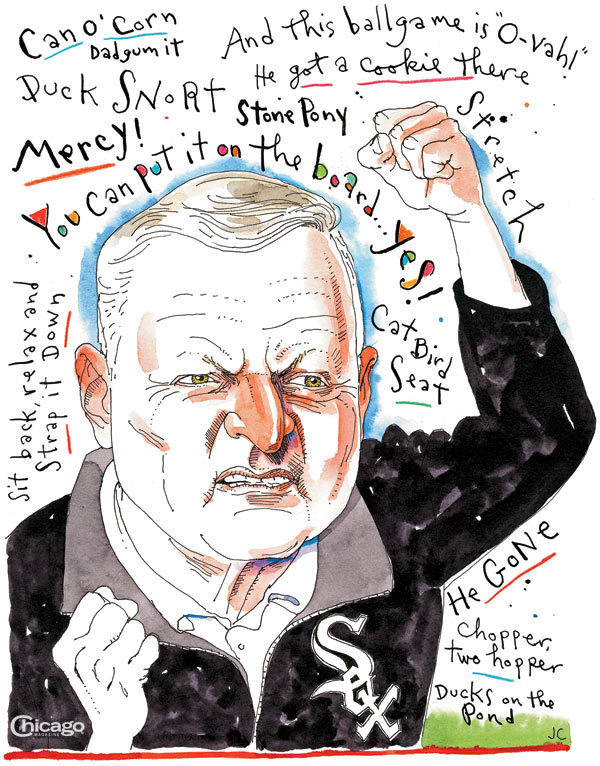 The Sox lost in both spectacular and lackluster fashion this week, but the main take away should be that they lost. The team went 2-4 in matchups against two division leaders in the Cleveland Indians and the Chicago Cubs. The latter of which was just the shit cherry on the shit sundae that is the 2018 season. I was hyped for the chance to put some fear in the Cubs NL Central title hopes, but Ricky’s Boys were clearly outmatched. Earlier in the week the White Sox traveled to the house that Drew Carey built and managed to claim one extra inning victory the day after they were walked off by a Jason Kipnis 9th inning grand slam. You can blame me for that one as my call out of Ian Hamilton last week clearly got to his head.

The young reliever drew the short straw and promptly gave up two hits including the game winner. The Sox headed home for the weekend to take on the North Side AAA team and surprisingly lost another 2 of 3. The team put the beat down on the Cubs, 10-4, on Friday behind the bats of Ryan LaMarre, Kevan “Weird Spelling” Smith, and Daniel “Power Pierogi” Palka only to have their bats fall flat during Saturday’s 8-3 loss. The South Siders finished off the weekend the only way they know how by losing 6-1 while not even putting up a fight during Ken “Hawk” Harrelson’s final game. The long time broadcaster officially turned off the mic after being a part of baseball for the past 6 decades.

A lot of people have strong opinions on Hawk. Almost every baseball fan that is not a fan of the Sox hates Hawk Harrelson and even some of our own fans struggle to acknowledge their fandom in him. But for the strong majority of White Sox fans, of which I am one, Hawk is a legend. The man has been calling White Sox games since before I was born and always showed that he was as big of a fan as anyone. Listening to a game Hawk was calling was just like having your grandpa right next to you for 9 innings. A little funny, a little ignorant, and a solid serving of old man yelling at a cloud. He started his career as a player in 1963 and retired in 1971 after stints with the Kansas City Athletics, Washington Senators, Boston Red Sox, and Cleveland Indians with his best season coming in 1968 on the Red Sox where he hit 35 home runs and 109 RBIs earning his first and only All Star selection.

In my opinion, the most interesting part of Hawk’s life came when he briefly became a professional golfer. He even shot his way into an invite for the 1972 British Open though he missed the cut by 1 stroke while shooting a +11. That is not good at all, but impressive nonetheless.

He returned to baseball for his first turn in the booth with the Red Sox and then later the White Sox before getting a shot as a GM in 1986. It was in this role on the South Side that he fired Tony LaRussa, the 3rd winningest manager of all time who went on to win 3 World Series between the Oakland A’s and St. Louis Cardinals. He also fired his assistant GM and traded away future 6-time All Star, Bobby Bonilla, only to be fired himself at the end of the season. Hawk was back with the team in 1990 as the play by play announcer and stayed in that role until this past Sunday. Over the past 28 seasons, we have been graced with the likes of ‘He Gone’, ‘Mercy’, ‘Streeeeech’, and ‘You can put it on the boaaaaaard, YES!’. These hawkisms have become a staple of White Sox history and are so engrained in so many of my favorite White Sox memories. I’ll miss the angry rants at Joe West and the ‘bleepin’ missed calls, but I’ll mostly miss the future Sox moments that would only be made better with Hawk.

Tim Anderson had an eventful week, joining the White Sox record books and being thrown out of a game all while continuing to contribute on the defensive side of the ball. The shortstop had a home run on Saturday night then was tossed a few innings later for arguing with Joe West. That’s two too many Joe West mentions in a blog, so I’ll end that by agreeing with Anderson’s assessment that West is ‘terrible’ and ‘everybody knows it’. That home run was number 20 on the year and made him the only White Sox shortstop to ever hit 20 home runs and steal 20 bases in a season. On the whole, that is woefully pathetic for a team that has been around since 1901, but also very cool for him. Anderson has not played up to his potential this year on offense, but has shown tremendous progress in the field. He has 9 less errors in as many games as a year ago and currently has the highest fielding percentage of his career.

One of the main studs of the #FutureSox, Yoan Moncada, has been showing life after crapping away most of the season. Moncada has hit .310 this month and had 9 hits this past week. I’m not sure if this will roll into 2019, but it is good to see that Yoan can actually hit major league pitching. He doesn’t have any home runs in September and if that is the key to him raising his average – then I’m all for it. We don’t need power numbers from our 2nd baseman nearly as much as we need someone who can hit above .300 and get on base at the top of the order. The power needs to be an added luxury for Moncada and not the main attraction. We have his fellow countrymen Abreu and #NextSox Eloy Jimenez for that.

Quick update on Jose Abreu. He was out this week after a thigh infection hospitalized him before the Indians series and there is no timetable for his return. The team says that this is not related to his August surgery and DL stint, but with one week left in the season I don’t see Abreu coming back. A disappointing finish to a disappointing season for Jose. The first baseman will most likely finish the season batting .265 with 22 home runs and 78 RBIs. The numbers are solid major league numbers and Abreu was even voted to start the All Star game after tearing it up in April and May, but far from the norm for him. I fully expect Abreu to be back for the 2019 White Sox and hope he is in our long term plans. He has been a rock in this lineup for his entire tenure and will provide the veteran presence and stability needed for a World Series run.