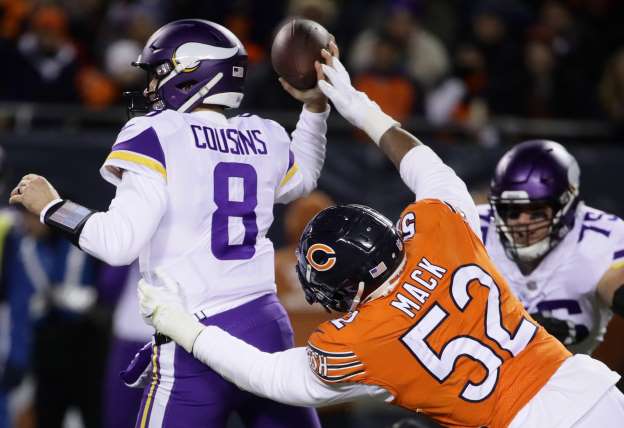 It wasn’t perfect. But it didn’t have to be.

After racking up wins and building momentum against weaker opponents like the Jets, Bills, and most recently, the Lions, the Bears showed up Sunday night with something to prove: Could they beat a tough opponent, or would they fall short for the fourth time this season?

Almost no one picked the Bears to win, and if pressed, I probably wouldn’t have either. But this time, the dominant defense + just-enough offense formula added up to a 25-20 win, putting the Bears at 7-3 on the season and giving them a real cushion over the Vikings (5-4-1).

Against the Vikings, whose defense is also fearsome, it was never going to be the Bears offense taking the reins. Instead, they’d have to rely on the defense to hold off Minnesota and give Trubisky and Matt Nagy’s other offensive weapons enough good chances to put up points.

The start of the game went according to that script: The Bears forced a three-and-out, with Akiem Hicks (absolute animal) making the stop on third-and-inches (one of five tackles for loss he would have), and then Trubisky moved the ball enough to set up Cody Parkey (who’s been practicing!) for a chip-shot field goal.

Both team’s offenses had a rough time after that, exchanging turnovers (Minnesota’s being a Khalil Mack-induced fumble on the Bears’ 14-yard line) and a three-and-out before the Bears offense, slowly but surely, lurched down the field – 13 plays, 7:13 of time off the clock, and most importantly, a touchdown (with a great celebration, to boot). After a two-point conversion and another Parkey field goal, the Bears led 14-0 at halftime.

The Vikings didn’t stay out of it. After exchanging punts with the Bears, their defense started giving Chicago a taste of its own medicine, intercepting a Trubisky pass and forcing a Tarik Cohen fumble, setting themselves up with great field position both times.

But the Bears defense kept making up for the offense’s shortcomings: On both ensuing Vikings possessions, the Bears notched key sacks (from Mack and Hicks – who else?) and forced Minnesota to settle for a pair of field goals. Those were the first daggers.

The daggers would keep coming. After the Vikings forced a Bears punt down 14-6, they had all the momentum going their way as they looked to tie the game with a successful offensive drive. But Eddie Jackson was having none of that.

The next Vikings drive did see them march down the field to the endzone, as they pulled back to within a touchdown of tying the game. But in the conclusion to one of the greatest two-game redemption arcs I’ve ever seen, Cody Parkey – after hitting the uprights not once, not twice, but four times last week – split the uprights with a 48-yard field goal to make it a two-possession game again, and that would turn out to be enough.

The Vikings scored another touchdown on their next drive, but they failed to convert a two-point conversion and couldn’t recover the onside kick with 48 seconds remaining.

The dust settled. There were bodies everywhere after the havoc Bears defenders had wreaked.

And the Chicago Bears were still in first place.

The Bears proved a lot on Sunday night. They showed that beating the Lions wasn’t a fluke, and they’re now within one divisional win of the total that Marc Trestman and John Fox managed in multi-year tenures (three divisional wins apiece).

They showed that their offense has a lot of weapons, and even if it’s not all clicking (Trubisky had a poor 61.9 passer rating to go with two picks against one touchdown) they can still find ways to score – like when Trubisky scrambled for multiple Bears first downs.

They showed that their defense is an absolute menace and that sometimes, yes, it really can do enough on its own to beat good teams, instead of falling just short like they did against the Packers, Dolphins, and Patriots.

But most of all, they showed, once and for all, that this is a legitimate playoff contender, and a legitimately fun team to watch. There are still plenty of doubts to be had about this team, and it remains to be seen if they can stand up to the likes of the Saints and the Rams, both 9-1 and both undeniably the cream of the NFC crop.But I’ve said it before: when any playoff game can go either way, all you have to do is get to the dance and you’ve got a shot.

The Bears will aim to notch their third divisional win of the season on Thanksgiving, as they play the Lions (4-6) for the second time in three weeks. They’ll be on the road on short rest, but it’s a lot easier to feel good about that when you’re coming off a huge win. #BearDown