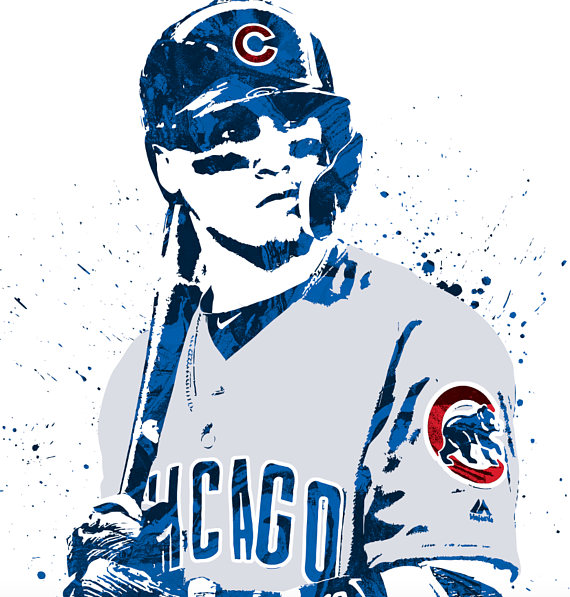 We all know Javier Baez as a flashy player who constantly shocks us with his lightning-fast tags and nearly-impossible defensive plays around the infield. In fact, his nickname is “El Mago”, which literally means “The Magician”. Yet somehow I’m more fascinated with his improvement at the plate. Somedays it seems like Javy will swing at any pitch, regardless

of where it ends up. So, how has he become such an offensive threat given his

free-swinging nature? I’m going to dig into the advanced stats and metrics to figure out

just how he became such a deadly force with his bat.

At first glance, the average baseball fan might notice Javy’s mediocre .268 batting average and immediately wonder why I just called him a deadly force. Well, let me start by saying

this – I completely agree that his batting average needs to be higher. However, batting average is the most basic of hitting stats, Javy is a scary hitter when you dive deeper into

Let’s start with some easy ones – on-base percentage (OBP) and slugging percentage (SLG). So far this season, Javy’s OBP is actually down to .299 (from .317 last season). All things considered, this is a pretty low OBP. In fact, among 12 Cubs hitters with at least 30 plate appearances this season, Javy ranks 11th in OBP. This is largely due to Javy’s inability (unwillingness?) to take a walk. The man fucking swings at everything! His walk percentage (BB%) is just 3.4%, meaning he’s taking a base-on-balls just 3.4 times out of every 100 plate appearances. That’s nuts. He loves to swing the bat. I once saw him swing at a ball that had already bounced in the dirt five feet in front of him. However, when he does make contact, it’s been doing some serious damage. Slugging percentage basically measures a player’s number of bases earned per at-bat. Among Cubs hitters, Baez is 2nd only to former-MVP Kris Bryant in this category with a massive .565 slugging percentage. In fact, among 164 qualified hitters in the MLB, Javy ranks 14th in SLG – good enough to land him on the list next to big-time hitters as Freddie Freeman, Gary Sanchez, and Aaron Judge. Not too shabby, huh?

We agree that when Javy hits it, it’s going somewhere useful, right? So naturally the next thing to look at is how often he’s swinging and how often he’s making contact. I can tell you this – those two metrics are on polar opposites of the spectrum currently. Among those same 164 qualified hitters, Javy ranks 1st in the MLB in Swing%, swinging at 60.3% of

pitches he’s seen this year – up from 56.2% in 2017. He’s essentially swinging at everything, so it’s even more remarkable that he’s having this kind of success. Among the top 20 leaders in Swing%, “El Mago” trails only Ozzie Albies in SLG.

This is where it’s about to get weird.

We see that Javy is swinging more often than anyone else in the league. So, how often is he making contact? There’s a metric for that too… Contact%. This measures how often a hitter is making contact per swing. Javy’s 69.6% Contact% ranks 155th in the MLB, just a few percentage points among notorious windmills such as Aaron Judge, Giancarlo Stanton, and Joey Gallo. This dreadful Contact% is actually up from his 65.8% Contact% in 2017. Judge, Gallo, and Baez all finished in the bottom-five of this category last year, and Stanton wasn’t much further ahead.

One thing that has really stood out to me is the fact that Javy’s strikeout percentage (K%) is actually a respectable 22.6% (28.3% in 2017) despite literally swinging at everything coming his way. I can’t emphasize this enough: HE SWINGS AT FUCKING EV-ER-Y-THING! Some players that have similar Contact%’s as Baez – Khris Davis, Jackie Bradley Jr, and Paul DeJong – have K%’s of 25.9%, 28.8% and 29.2% respectively. I simply don’t have an answer for this – he absolutely should be striking out much more often, but he just isn’t. Again, he’s a fucking magician!

So Javy swings more than any other hitter in the league and is also in the bottom 10% of the league in making contact, so where is his success coming from? Well, we’ll have to dig a little bit deeper to get the answers.

It’s generally agreed upon that, aside from certain situations, hitting line drives is much better than hitting ground balls or fly balls. Additionally, hitting hard line-drives is even better. According to Fangraphs, Baez is hitting a line drive 23.6% of the time, which currently ranks 44th in the MLB (top 30%) – right next to names like Odubel Herrera and J.D. Martinez.

He’s also making hard contact 38.0% of the time, good for 72nd in the MLB (top 50%). Both those numbers are way up from last season, so he’s definitely trending in the right direction there. Additionally, from 2016 to 2018, his average exit velocity has improved each season, going from 86.4 MPH to 86.9 MPH and finally to 89.6 MPH this year. I’d say that’s one way to improve your offensive output: hit the ball harder and hit more line drives.

Something to keep an eye on throughout the rest of the season: Javy’s batting average on balls in play (BABIP). In 2016 and 2017, his BABIP’s were .336 and .345 respectively. This season, his BABIP is way down to .288, which can usually indicate that a player has been “unlucky”, and that more of the balls put in play should have resulted in hits. I’d expect that number to climb over .300, and if he continues his incredible power output, this could be a special season for Baez. Currently through 42 games played, he has produced 28 runs, 11 home runs, and 38 runs batted in. Fangraphs’ “ZiPS” projections has Javy playing in 149 games this season, and if he continues on this current pace, that would give him 99.3 runs, 39 home runs, and 134.8 runs batted in, which would be an incredibly productive. For reference, during Kris Bryant’s 2016 MVP campaign, he played in 155 games and produced 121 R, 39 HR, and 102 RBI – an excellent season by all metrics. I don’t expect Javy to reach all of these projected numbers, however I can see him scoring 90 runs with 30 home runs and 90 runs batted in. As far as I’m concerned, anything more than those numbers would be a blast of icing on the motherfucking cake (sorry…I get excited).

It’s important to note that, while some of these stats have been really impressive, Javy has actually struggled in the month of May which has brought his numbers down quite a bit. After hitting .303 with a 1.032 OPS in April, his batting average and OPS have dropped significantly to .250 and .717 respectively in May. Hitters are known for being streaky, so this could just be a cold streak for Javy before he heats up again. I’m excited to see how Baez’s offensive contributions continue to grow this season, and I’m hoping that his early-season success was not just a “hot streak”. If he can maintain this level of success, it adds yet another weapon to an already-potent Cubs offense, and that’s scary to think about!