World Series : Clash of the Titans 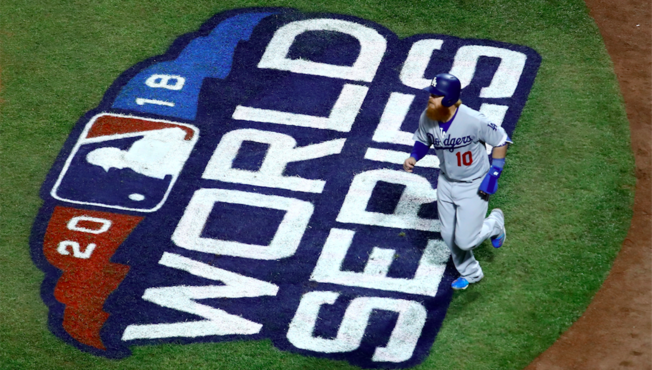 Only two teams remain in the running to be crowned baseball’s best: the Boston Red Sox and the Los Angeles Dodgers. It’s a battle of talent-laden powerhouses, a true Goliath vs. Goliath just like the ALCS – and in fact, this is the most expensive pair of rosters to ever take the World Series stage.

With their 8-4 loss last night in Game 1, the Dodgers are in an even bigger hole. It was a back-and-forth game, with the Dodgers tying the game twice, at 2-2 and 3-3. Neither Clayton Kershaw nor Chris Sale lasting five innings. Ultimately, though, the Red Sox grabbed a late lead and, with the score 5-4, a pinch-hit three-run homer put the Dodgers away.

But there’s a lot of baseball left. Here are some of the important things to know about the 2018 World Series – who these teams are, and what needs to break right for either of them to come out on top.

At a glance, the Dodgers would seem to be severe underdogs, as their 92-71 regular-season mark pales in comparison to Boston’s impressive 108-54. And while that ranking bears out – Dodgers as underdogs, Red Sox as favorites – there’s a lot more to it.

The Red Sox didn’t have an easy path through the postseason, but it hasn’t mattered. In the ALDS and ALCS, they played arguably the two strongest opponents in the postseason, the Yankees (100-62) and the Astros (103-59).

The Yankees put up a fight through the first two games, but they were pummeled in Game 3 16-1 and bounced in Game 4. The Astros, meanwhile, looked energized and ready to defend their title after taking Game 1 of the ALCS 7-2 – but the Red Sox removed any doubt about who the best team in the AL was, rattling off four straight wins to knock Houston out in five games.

The Dodgers, meanwhile, got a late start in the regular season, but stayed hot until the end and beat the Rockies in a game 163 tiebreaker for the AL West. And downed the Braves in the NLDS, 3-1.

Their NLCS, though, was a seesaw. The Dodgers took a 3-2 lead heading back to Milwaukee before dropping Game 6, at which point the Brewers seemed poised to make their first World Series berth since 1982. But key home runs – including a back-breaking three-run laser by Yasiel Puig – sealed the NLCS in Game 7.

This series of superstars seems to come down to a few key performers. Both teams have high-octane offenses that can score a lot – the Red Sox led all of baseball in runs scored and OPS, while the Dodgers were fifth and third in those categories overall, respectively, but tops in the NL in both. In the playoffs, though, both teams have missed some important contributors.

For the Dodgers, Puig has performed at his usual postseason caliber, but Justin Turner has done relatively little and Cody Bellinger has slashed an abysmal .139/.244/.250 (.494 OPS).

If his Game 7 home run was a sign of things to come, that bodes well for the Dodgers, whose deep lineup looks a lot scarier if the biggest names are crushing baseballs.

On the Red Sox side, Jackie Bradley Jr. was the ALCS hero, getting big hits when needed and driving in nine runs. And they’ve needed that, because they’ve missed Mookie Betts (.578 OPS in the postseason) and Andrew Benintendi (.625) big-time. J.D. Martinez hasn’t put up a huge showing, either, but with the other two lagging it’s hard to call that out.

If either of these teams’ biggest stars start raking like we know they can, that could be the difference in a closer-than-it-looks series – and Betts and Benintendi showed up in Game 1. Can the Dodgers’ bats respond?

Clayton Kershaw and David Price are good pitchers. That’s a huge understatement, of course, but for whatever reason, both of them have had postseason struggles in their careers.

For Price, it’s a lot more of the “bad” column than the “good” one, as he’s the owner of a 5.04 ERA (85.2 IP) and a 3-9 record in the postseason. But if there’s reason for optimism, it lies in the fact that he put his Game 2 start behind him and pitched the postseason game of his life for the Red Sox in their ALCS-clinching Game 5, throwing six innings of shutout baseball while striking out nine Astros.

Both teams have deep rotations, there’s no denying that, but it’s in Games 1 and 2 that these teams will have a real chance to set the tone and put the opposition on the ropes by going up 2-0. Kershaw pitched respectively, but not like an ace, and LA dropped Game 1 with him on the mound.

Now we wait to see if Price will step up again in the postseason.

It’s hard to pick against the Red Sox. Their 108 wins have been backed by knocking off (arguably) the best teams in the playoffs besides Boston, the Yankees and the Astros. They have home-field advantage, a monster offense, and a rotation that’s both top-heavy and deep.

A reason to at least pause and consider the Dodgers? After May 16 – when LA was languishing at 16-26 on the season – the Dodgers kept a pace much closer to the Red Sox than their respective records would suggest, with Boston going 79-40 to end the season and Los Angeles putting up a 76-45 mark.

Even so, the Red Sox finished off the Astros in five games, and while they might have caught some breaks in the process, it’s hard to see them falling to the Dodgers, who went to seven games with Milwaukee. For drama’s sake, I’ll pull for a longer series, but still – Boston in 6.