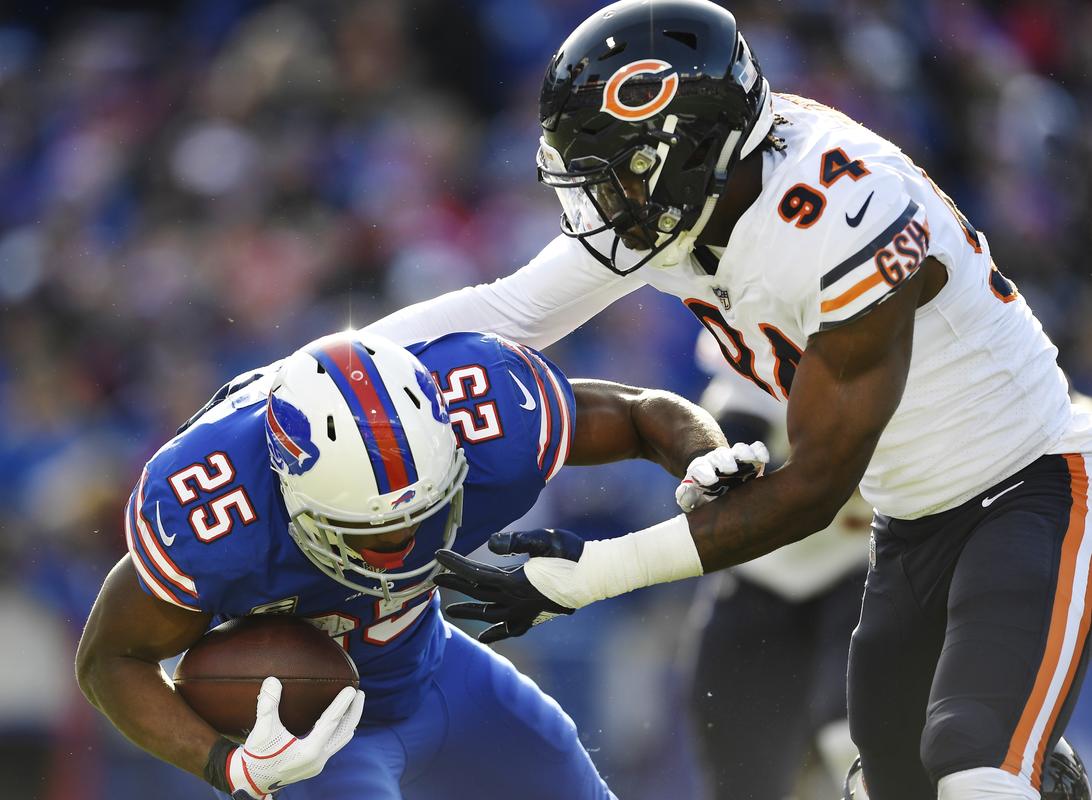 Heading into a pair of should-win games against the mediocre Jets and awful Bills, it was easy to see a scenario where the Bears might get cocky too soon, playing down to a pair of lesser opponents and potentially even dropping one of the games.

But after forcing the Jets to make an emergency landing last week, the Mack-less Bears defense stayed tough against a toothless Bills offense, taking the ball away four times and leading a 41-9 route to put the Bears at 5-3 on the season.

Sure, the offense and defense still can’t seem to show up at the same time, but so far the Bears have shown they only really need just enough of both ingredients to stack up wins.

And with three consecutive upcoming games against divisional opponents, these are wins that can build momentum heading into a potential playoff push in the second half of the season.

The Bears sure didn’t look like they were en route to a rout after they fumbled the ball on third down during their first possession (Bears recovered), knocked themselves out of field goal range, and ultimately failed to score in the first quarter.

The Bills also failed to do much of anything on offense, but this is a team averaging just over 10 points a game and going nowhere, fast.

But for the Bears, scoreless against a 2-6 opponent? That looks more like the .500 team they were through Week 7 than a true contender. Thankfully, the nail-biting and hand-wringing didn’t last long.

The best action in this game was all during the second quarter, and it started with the Bears converting a dismal-looking third-and-15 on the first play with a 26-yard strike from Trubisky to Trey Burton to put the Bears in the red zone.

A few running plays later put the Bears at the one-yard line before Jordan Howard walked into the endzone for the first points of the game.

It didn’t take long for the Bears defense to start tormenting the Bills, as two possessions later they forced a fumble that Eddie Jackson scooped up and ran 65 yards the other way for a 14-0 Bears lead.

The Bears picked off Nathan Peterman on the second play of the next Bills possession, gave the ball back on a three-and-out just to be polite, and then picked him off again three plays later, this time with Leonard Floyd finding the endzone for the Bears.

After a Bills three-and-out, Tarik Cohen channeled his inner Devin Hester and almost brought the punt back for another TD, instead setting the Bears up for one last second-quarter touchdown two plays later on a punishing 18-yard run by Howard.

Wake me up when it’s over

You could have slept through the second half if you wanted to. After the Bears built up a 28-0 lead before halftime, the rest of the game was just a formality.

The teams exchanged field goals to start the third quarter, the Bears got another interception in case anyone felt like three turnovers weren’t enough, and then they sandwiched another field goal and a touchdown pass around a Bills TD in garbage time to bring the final to 41-9.

Stop me if you’ve heard this one

The Bears offense disappeared yet again in this game, but with enough experience, they should start to show some consistency.

It’s just… well, it’s getting a little late in 2018 to expect much change this season, so the best the Bears can probably hope for is a berth as a mid-tier playoff team (likely as a Wild Card) and for their defense to hide the fact that Trubisky still plays like a rookie half the time.

Meanwhile, the defense is still (almost) making everyone forget it’s missing its biggest piece, taking the ball away from the Bills four times (and scoring two TDs) after failing to do so against the Jets.

And it was more havoc-wreaking this week in general, as the Bears tackled Bills ball-carriers 12 times for losses, hit Peterman seven times, sacked him four times (with two more canceled out by penalties), and stifled the run so much that Peterman had to drop back for a whopping 49 pass attempts. They looked just as good as they did with Mack’s added energy, and it shouldn’t be long before they’re able to add him back in again.

Up next: The NFC North gauntlet

The Bears have had a weird schedule thus far, as now, having just finished a four-game stretch against the entire AFC East, they’ll play three consecutive games against NFC North opponents, with a critical matchup against the second-place Vikings in Week 11.

These past two weeks were crucial momentum-builders, as the Bears added some meat to the win column against cupcake opponents.

But now we’ll see the true test. Are the Bears for real? They’ll need everyone to show up – offense and defense – if they want to stay atop the division and make a real playoff push.