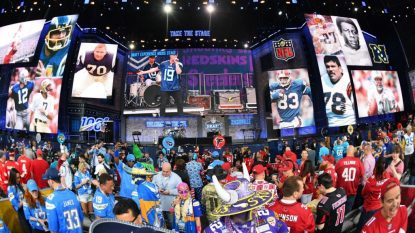 The NFL Draft is always a nice spring-time pick me up from having no NFL football since February. This year, more people than ever thought exactly that. The NFL announced 47.5 million people watched the 2019 NFL Draft on TV. The live event itself in Nashville took in over 600,000 avid fans. This was both the highest rated and most watched NFL Draft in the history of the event.

The NFL has finally found the right formula for this event. After having it in The Big Apple for such a long time, it was time to shake things up. Success has come by switching up the location every year, as more and more people watch the event than ever before.

After 49 years in New York City, the NFL took the event to Chicago in 2015-2016, Philadelphia in 2017 and then to Dallas in 2018. The NFL has capitalized greatly on turning the event into a full-weekend spectacle. Next year the 2020 NFL Draft will take place in Sin City. Las Vegas will play host and we can only expect that draft to be nothing short of an extravaganza.