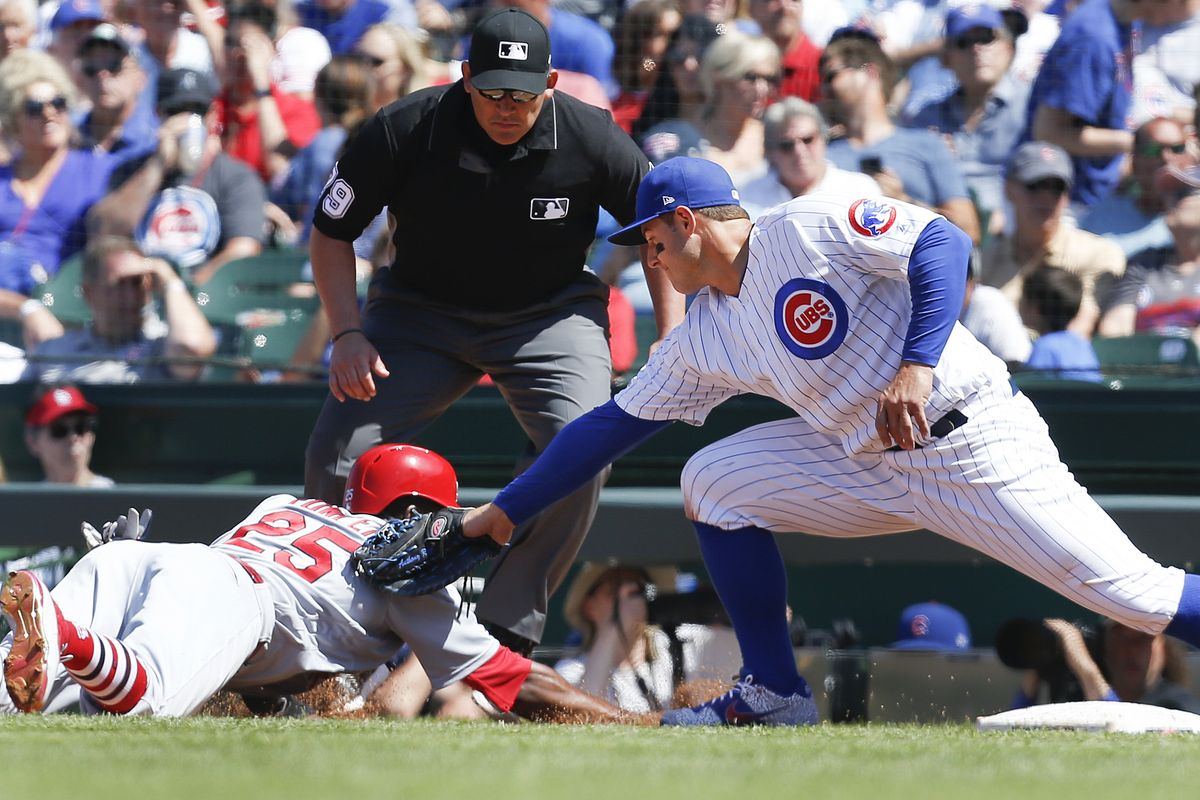 Last week’s edition saw the Cubs knocked into second place behind the Brewers after losing two of three at Houston and being swept by the Cardinals. Falling into place could easily be something to get mad about—entirely understandable, in a close-fought division race that figures to last all season.

But like earlier in the year, a quick homecoming was exactly what they needed to get back on track. The Cubs kicked things off with an 8-1 win over the Angels in a makeup game. They followed that with two of three from the red-hot Rockies and their second Wrigley sweep of the Cardinals.

The Brewers, meanwhile, swept the Pirates but lost two of three to the Marlins (lol) earlier in the week, putting the teams in a virtual tie for first place in the division.

Prior to the series at Wrigley, the Colorado Rockies had won eight in a row and nine of their last 10. With the Cubs looking as flat as ever, this series could have gone sideways in a hurry—but the Cubs grabbed two of three, managing 6-3 and 9-8 victories in the first two contests and dropping the finale, 3-1.

The first game was a pedestrian victory. The Rockies scored first off Kyle Hendricks, but the Cubs answered with two in the bottom of the second. Colorado tied things up before Kyle Schwarber untied things for good with this mammoth shot. The Professor struck out 10 across seven solid innings, and the bullpen tidied up for a 6-3 win.

If the first game was pretty standard, the second was anything but. Starters Yu Darvish and German Marquez dueled through 4.5 innings, with the latter looking particularly untouchable. It was Marquez who blinked first, though, coughing up a three-run bomb by David Bote.

After the Rockies immediately tied things up and chased Darvish, Marquez trotted out there again. The Cubs decided three runs weren’t enough and put up a five-spot instead, capped, again, by Bote driving in three runs at once.

An 8-3 lead might seem safe, but this is the Cubs’ bullpen and there’s a damn good reason they went and signed Craig Kimbrel for a lot of money. Brad Brach entered in “relief,” coughing up four runs in just a third of an inning. But the Cubs didn’t relinquish the lead, and Bote knocked in one more (key) insurance run for 7 RBI and a 9-8 Cubs victory.

As exciting as game two was, the finale was boring once more. José Quintana faced off against a guy named Peter Lambert, a pitcher making his MLB debut that you just knew the Cubs wouldn’t solve. Lambert was sharp, though, striking out nine Cubs hitters and getting the win in a 3-1 Cubs loss.

But as esteemed musician Meat Loaf would say, two out of three ain’t bad.

The Cardinals paid the Cubs back for their first Wrigley sweep with a sweep of their own at Busch Stadium, knotting the season series at three apiece. Apparently, the visiting teams will never win a game, though, as the Cubs again took it to the Redbirds at Wrigley, with 3-1, 9-4, and 5-1 victories.

In the first game, Cole Hamels was once again unsolvable for the Cardinals. He pitched eight scoreless innings and struck out 10 Cardinals, giving the Cubs ample opportunity to solve their own problem in Miles Mikolas. Javy Báez took care of that right away and the Cubs cruised to a 3-1 win.

The second contest looked like it was about to be one of the worst games of the year—and then turned into one of the best. Jon Lester coughed up four runs (on two homers) before the Cubs took a single at-bat for an early 4-0 deficit. But when the Cubs scored twice in the home half of the first, it looked like one of those games where Lester would buckle down and gut out 5-6 innings.

Lester did just that—after 58 pitches in the first two innings, he managed quick outs from St. Louis hitters and kept the Cubs in the game. They rewarded him by coming all the way back, with Schwarber tying the game and Victor Caratini putting it away en route to a 9-4 final.

In the finale, class was back in session. Hendricks, despite not having his best strikeout stuff, pitched seven innings and gave up just one run, giving the Cubs plenty of leeway to score runs and back him up. The scoring was capped off with CarGo’s first Cubs homer, and the Cubs had a 5-1 win and the sweep.

Will the visiting team ever pick up a win in this series? We won’t find out until the Cubs make their second visit to St. Louis for a weekend series at the end of [checks notes] July??

Following the strong homestand, the Cubs make a West Coast swing. They’ll visit the Rockies for three games, their second series against that squad in two weeks, and I swear that’s happened like three or four times already this season. More meatloaf seems like the way to go here, with the Cubs grabbing two of three at Coors Field.

Right after that, the Cubs head to Los Angeles for their first meeting with the Dodgers, who boast the NL’s best record thus far (45-21). If the Cubs can get two wins and split the four-game series on the road, I think they’d have to be pretty satisfied heading into their off-day next Monday.